VANCOUVER, BC / ACCESSWIRE / August 31, 2020 / Belmont Resources Inc (TSXV:BEA)(Frankfurt:L3L2) ("Belmont"), (or the "Company) is pleased to announce that it has engaged Pioneer Exploration Consultants to fly UAV (unmanned aerial vehicle "drone") and a helicopter LIDAR survey over its recently acquired Athelstan-Jackpot ("A-J") gold project and Come By Chance ("CBC") copper-gold project.

The properties are situated in the prolific Greenwood mining camp of southern British Columbia.

The property shows strong potential to contain a major gold system based on the gold production of the two shallow historic gold mines and more recent sampling of extensive trenches, pits, adits and mine dumps on the property.

Listwanite (carbonated-serpentinite) is commonly associated with high-grade lode-gold mineralization.
The Mother Lode gold district in California (Wittkopp, 1983) and the Abitibi greenstone belt of the Superior Province of Canada (Schandl and Naldrett, 1992) are two of the most well-known examples of listwanite-associated lode-gold in North America. In general, the richest gold grades within these deposits are associated with, or in close proximity to carbonate-altered ultramafic rocks (Listwanite)· (e.g. Ash 2001). Listwanite is also directly associated with several multi-million ounce gold deposits in British Columbia, Atlin, Bralorne and Barkerville.

The formation of listwanite rocks requires a precursor body of serpentinite before this particular style of alteration can evolve. Bohlke and Kistler (1986) noted that mineralized quartz veins in the California Mother Lode deposits show a spatial association with serpentinite bodies and that the largest concentrations of free gold occur at or near the intersection of veins with the carbonatized ultramafic rocks (listwanite). The A-J property contains a large mass of serpentinite and listwanite situated along the Jackpot fault. 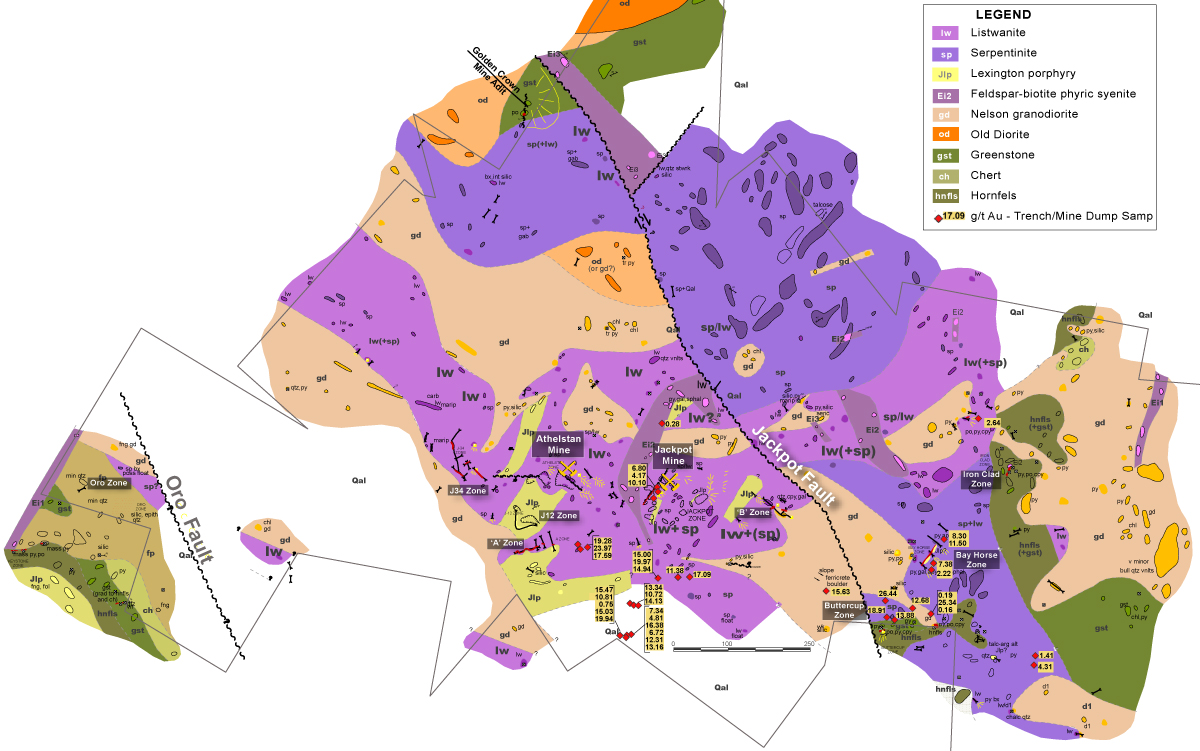 Listwanite zones form along major faults which act as pathways for the altering and mineralizing fluids, cutting or marginal to serpentinized ophiolite peridotites which in themselves may host sub-economic grades of gold. Gold concentrations appear to increase dramatically as the silica-carbonate alteration process destroys the magnetite releasing the gold.. The intensity of carbonatization or alteration of the serpentinized ultramafic rocks is zoned outward from the faults, producing a distinctive alteration halo.

In the western part of the property, a steeply incised creek occurs in an area of thick alluvial cover and little outcrop. The creek is inferred to represent a second fault zone (the Oro fault) which parallels the Jackpot fault about 1 kilometre to the southwest.

Most of the known mineralization on the property occurs between the Jackpot and Oro faults and is thought to be related to tension fractures resulting from movement along the faults.

The main source of gold in listwanites is thought to be derived from the chemical breakdown of serpentinite and the dissolution of gold-rich oxides such as magnetite. It is this destruction of magnetite that creates reduced magnetic susceptibility (mag lows).

The low level, high definition UAV magnetic survey will help delineate linears defined by aeromagnetic lows in serpentinite which may relate to zones of carbonatization (listwanite).

The magnetic survey will also help detect areas of vast listwanite-alteration which correspond to aeromagnetic lows and will aid in vectoring to potential lode-gold deposits. 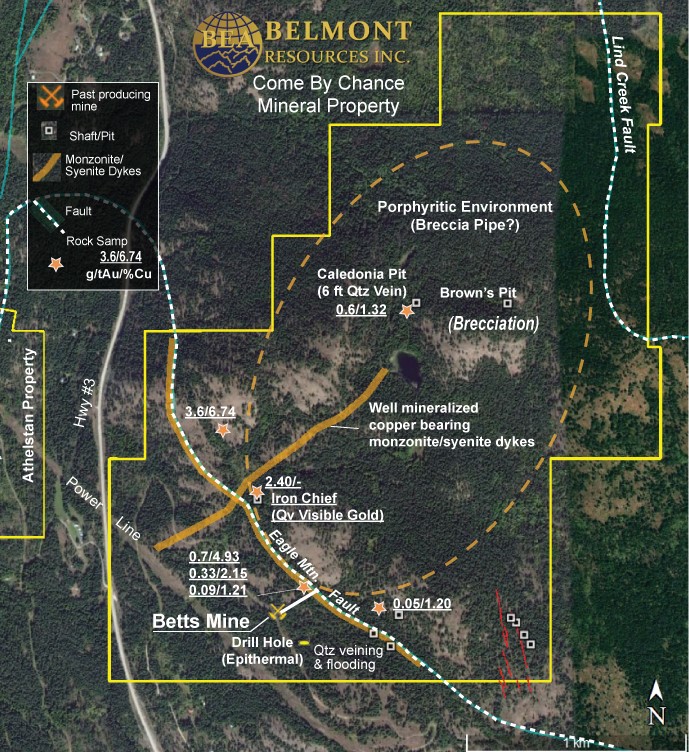 LIDAR sees through trees and has to potential to find previously unknown fault traces and other structures that potentially control mineralization.

For the A-J property LIDAR data will be important for providing clarity to the location of the Jackpot and Oro faults which are not presently clearly defined due to overburden and thick vegetation.

For the CBC property LIDAR data will help delineate the Eagle Mountain and Lind Creek Faults which appear to enclose the porphyry-breccia target. The LIDAR data will also provide important information as to the surface expressions of the breccia pipe(s) which may be linked to porphyry at depth.

The Company is awaiting approval of a 5 year drilling permit application for the A-J property.

The integration of high resolution magnetic and LIDAR data from the upcoming surveys into the Company's existing (GIS database) will enable Company geologists to select quality gold drill targets for an upcoming drill program on the A-J property.

Belmont President & CEO George Sookochoff commented, "The investment community has been overwhelmingly supportive of our exploration plans as shown in our recent over-subscribed private placement. With money now in the treasury we can proceed to unlock the tremendous potential of the Athelstan-Jackpot gold and Come By Chance copper-gold properties."

Belmont Resources is a British Columbia based company engaged in the business of acquisition, exploration and development of mineral properties located in the highly prospective Greenwood-Republic mining camps. The Company has over a short period of time systematically acquired six past producing gold-silver and copper-gold mines. 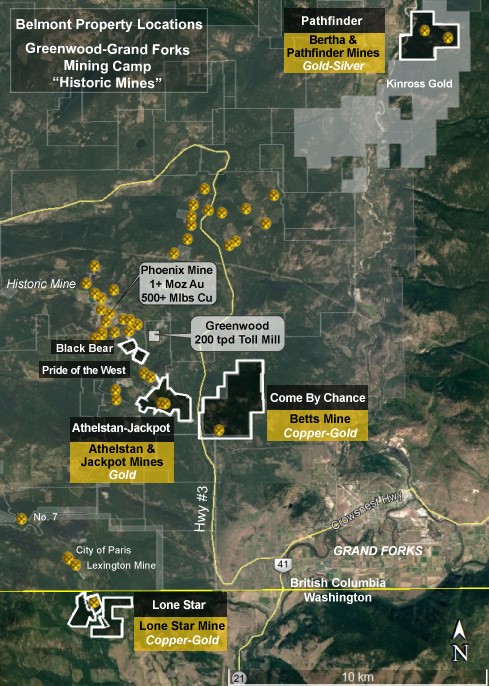 The scientific and technical information that forms the basis for parts of this press release was prepared and/or reviewed by Laurence Sookochoff, P.Eng., who is a Qualified Person "(QP") as defined by National Instrument 43-101

ON BEHALF OF THE BOARD OF DIRECTORS