August 25, 2020 -TheNewswire - Vancouver, Canada – Teuton Resources Corp.  (“Teuton” or “the Company”) (TSXV:TUO) (Frankfurt:TUC) is pleased to announce it has optioned its wholly-owned Lord Nelson property to Decade Resources.  The 2,630 hectare property is situated within the Golden Triangle of northwestern British Columbia, 34 kilometres east of Stewart.  It is located along a major structural break between volcanics to the west and sediments to the east, a favourable contact which is the locus of numerous precious metal occurrences on the Del Norte property adjoining immediately to the south.

Decade has the right to earn up to a 55% interest in the Lord Nelson property under the following terms:

Decade also has the right to earn an additional 20% interest by placing the property into production.  Teuton retains a 2% Net Smelter Royalty.   The agreement is subject to TSX Venture approval.

Highlights of the property include:

Ed Kruchkowski, president of Decade stated: ‘the Lord Nelson tenures are on strike with horizons being tested by the Company in Nelson Creek. Also, helicopter flights to the area of the Del Norte drilling pass directly over the newly optioned tenures. The new showing area which is at low elevations allows the Company to have a longer exploration period”.

Dino Cremonese, P.Eng., President of Teuton commented as follows: “The Lord Nelson property has been under option by several companies over the years, including Geofine Exploration Consultants, Frontline Gold, Millrock Resources and most recently, ArcWest Exploration.  Although Arcwest geologists discovered grab samples running to 272 g/t gold on the property in 2019, they decided to relinquish the option.  Had they continued they would have been required to spend over $800,000 on the property in 2020.  The current optionee, Decade Resources, is already exploring Teuton’s Del Norte property located south of the Lord Nelson through an option entered into in January of this year.  Decade Resources is headed by Ed Kruchkowski, one of the Golden Triangle’s most well-known geologists.  We wish Decade luck in advancing the Lord Nelson property.   This option is consistent with the Company’s policy of spreading exploration risk through joint venture agreements.”

The Qualified Person for Teuton Resources, Dino Cremonese, P. Eng. (who as President is not independent of the Company), is responsible for the contents of this news release.  He has not independently verified the samples taken by Arcwest Exploration geologists in 2019 as reported herein, but has no reason to believe they are inaccurate.

Decade Resources, optionee of the Del Norte property, has informed the Company that drilling is continuing at the Del Norte project and is successfully intersecting all intended target zones.

Teuton owns interests in more than thirty properties in the prolific “Golden Triangle” area of northwestern British Columbia and was one of the first companies to adopt what has since become known as the “prospect generator” model.  Eight of these properties are currently under option to third parties.   Over $4 million in option cash and share payments has been generated from these properties since 2015, including properties where optionees have already earned their interest.

One of Teuton’s properties, the Treaty Creek, is presently the subject of a multi-million dollar exploration program testing the Goldstorm zone with six diamond drills. Teuton was the original staker of this property, assembling the core land position in 1985.  It presently holds a 20% carried interest in Treaty Creek (carried until such time as a production decision is made) as well as a 0.98% NSR in the claims covering the Goldstorm zone.  A 0.49% NSR is owned in the peripheral claims.   None of the NSRs are subject to a buy-back.  Teuton also owns eight other royalties in the Sulphurets Hydrothermal System with interests ranging up to 2.5%, none of which are subject to a buyback.  Interested parties can access information about Teuton at the Company’s website,

Certain statements contained in this press release constitute forward-looking information. These statements relate to future events or future performance. The use of any of the words "could", "intend", "expect", "believe", "will", "projected", "estimated" and similar expressions and statements relating to matters that are not historical facts are intended to identify forward-looking information and are based on the Company's current belief or assumptions as to the outcome and timing of such future events. Actual future results may differ materially.

All statements relating  to future plans, objectives or expectations of the Company are forward-looking statements that involve various risks and uncertainties. There can be no assurance that such statements will prove to be accurate and actual results and future events could differ materially from those anticipated in such statements. Important factors that could cause actual results to differ materially from the Company's plans or expectations include risks relating to the actual results of current exploration activities, fluctuating gold prices, possibility of equipment breakdowns and delays, exploration cost overruns, availability of capital and financing, general economic, market or business conditions, regulatory changes, timeliness of government or regulatory approvals and other risks detailed herein and from time to time in the filings made by the Company with securities regulators. The Company expressly disclaims any intention or obligation to update or revise any forward-looking statements whether as a result of new information, future events or otherwise except as otherwise required by applicable securities legislation. 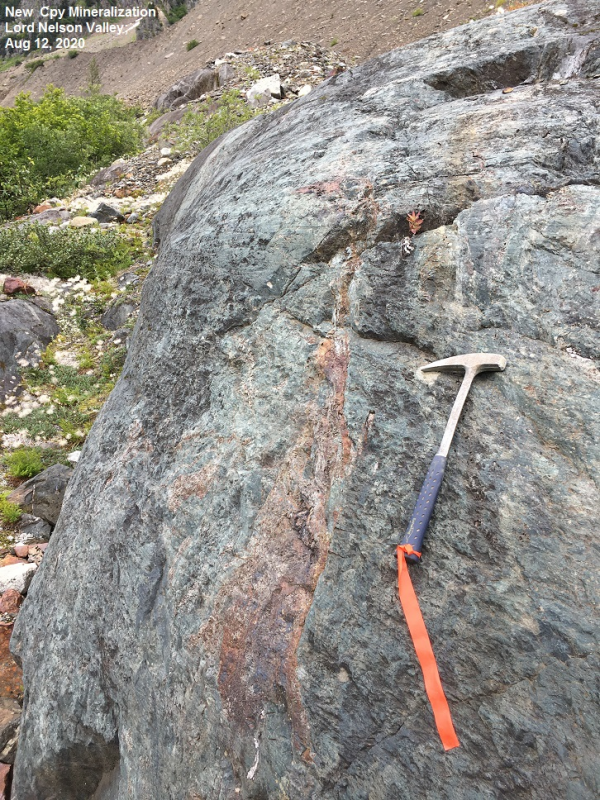