Toronto, Ontario--(Newsfile Corp. - August 1, 2019) - Maritime Resources Corp. (TSXV: MAE) ("Maritime" or the "Company") is pleased to provide an update on its exploration activities at its Hammerdown and Whisker Valley gold projects near the town of King's Point in the Baie Verte Mining District, Newfoundland & Labrador.

To guide our larger regional exploration campaign, the Company recently completed a high-resolution airborne gradient magnetic and VLF survey. The survey was completed by MPX International over the Green Bay (Hammerdown), Whisker Valley and Gull Ridge properties. A total of 1,934 line-kilometers of data was collected to enhance the regional geological model and to identify prospective corridors and locations for the next phases of detailed ground exploration, including soil geochemical sampling and ground IP surveys.

The Company has also commenced a widespread soil geochemical survey to the north of the 2018 drilling campaign at the Whisker Valley gold project, where several high-grade gold intersections were encountered below the trenched outcrop (see press release dated February 25, 2019). Prospecting and limited historical exploration in the area indicate that the gold mineralization may be extensive and a systematic approach of soil sampling, mapping, trenching and ground geophysics will be utilized to focus in on drill targets throughout the property.

At the Hammerdown gold project, Maritime is following up on the recent infill program with an additional 10 holes of infill diamond drilling totalling 1,500 metres ("m"). To date, four drill holes totaling 288 m have been completed. This small infill program is designed to test the Rumbullion East Extension area where near surface intersections of high grade gold were reported in earlier drilling, including 13.7 grams per tonne ("gpt") gold ("Au") over 1.20 m, and 18.0 gpt Au over 0.91 m in drill hole MP-19-64 (see press release dated July 11, 2019). Some of the shallow intersections reported in MP-19-64 are not part of the current resource wireframes and offer the potential to grow the mineral resource estimate. Additional drill holes are planned to also test the western extension of a highly altered felsic volcanic unit where lower grade gold mineralization was intersected over broader widths in drill hole MP-19-60 which returned 3.34 gpt Au over 4.17 m (see press release dated July 11, 2019). During the years when the Hammerdown mine was operated by Richmont Mines and gold prices ranged from US$300-400/oz, these lower grades of mineralized felsic volcanics were not considered economic and were often not sampled. In a potential development scenario where open pit mining is considered, these lower grade intervals could be important.

Following the geological trend from the Hammerdown deposit to the north-east at the fold hinge and wrapping around the fold is the Beetle Pond/Catchers Pond structure (see Figure 1). The Company is systematically exploring this highly prospective trend and an exploration grid has been established to guide the next phases of work, which will include soil geochemical surveys and an Induced Polarization (IP) geophysical survey to test the area for styles of mineralization that are similar to the high grade Hammerdown deposit located 1.3 kilometers to the west. Gold deposits in the area, including Hammerdown, have a strong and distinct chargeability response which makes IP surveys an effective exploration tool in identifying new mineralization.

Maritime also announces the retirement of Bernard Kahlert, P.Geo. who served as Vice President of Exploration for the Company. Garett Macdonald, President & CEO, adds, "I would like to thank Bernie for his service to the Company and the advancement of the Green Bay project in Newfoundland and Labrador. On behalf of Maritime Resources we wish him the best in his retirement." 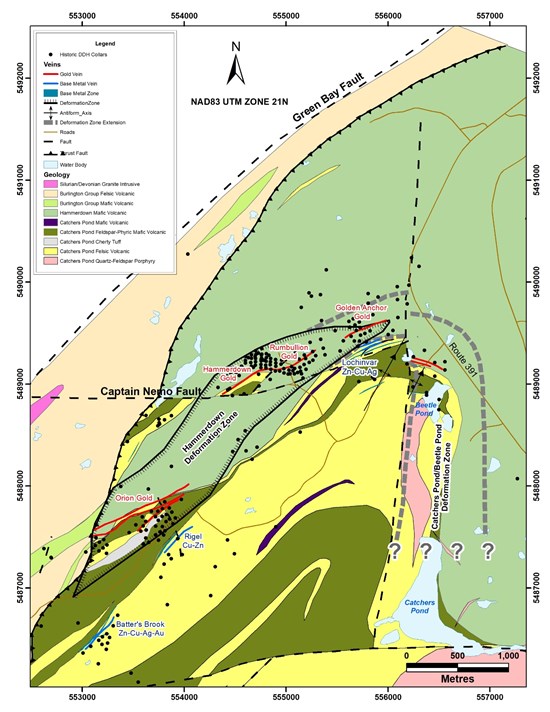 All samples assayed and pertaining to this press release were completed by Eastern Analytical Limited ("EAL") located at Springdale, Newfoundland and Labrador. EAL is an ISO 17025:2005 accredited laboratory for a defined scope of procedures. EAL has no relationship to Maritime Resources. Samples are delivered in sealed plastic bags to EAL by Maritime field crews where they are dried, crushed, and pulped. Samples are crushed to approximately 80% passing a minus 10 mesh and split using a riffle splitter to approximately 250 grams. A ring mill is used to pulverize the sample split to 95% passing a minus 150 mesh. Sample rejects are securely stored at the EAL site for future reference. A 30-gram representative sample is selected for analysis from the 250 grams after which EAL applies a fire assay fusion followed by acid digestion and analysis by atomic absorption for gold analysis. Other metals were analyzed by applying an acid digestion and 34 element ICP analysis finish. EAL runs a comprehensive QA/QC program of standards, duplicates and blanks within each sample stream.

Maritime's high grade Hammerdown and Whisker Valley gold exploration projects are both located near the Baie Verte Mining District and Springdale, Newfoundland and Labrador. The Hammerdown deposit is characterized by a number of near-vertical, narrow mesothermal quartz veins containing gold in pyrite. Hammerdown was last operated by Richmont Mines between 2000-2004 producing 143,000 ounces of gold at an average mine grade of 15.7 gpt Au through a combination of narrow vein open pit and underground mining.

CIM definition standards were followed for the resource estimate. The resource models used Ordinary Kriging grade estimation within a three-dimensional block model with mineralized zones defined by wireframed solids. A cut-off grade of 3.0 gpt gold over 1.2 meters was used for reporting resources with capping of gold grades at 125 gpt at Hammerdown and 50 gpt at Orion. A specific gravity of 2.84 was applied.

For additional information relating to the Hammerdown gold project, including the Orion deposit, refer to the NI 43-101 technical report entitled "Pre-Feasibility Study Technical Report, Green Bay Property" with an effective date of March 2, 2017, which is available on the Company's profile at www.sedar.com.

Exploration activities are administered on site by the Company's Project Manager, Newfoundland Properties, Larry Pilgrim, P.Geo. In accordance with National Instrument 43-101 Standards of Disclosure for Mineral Projects, Mr. Pilgrim is the Qualified Person for the Company and has prepared, validated and approved the technical and scientific content of this news release. The Company strictly adheres to CIM Best Practices Guidelines in conducting, documenting, and reporting its exploration activities on its exploration projects.

On Behalf of the Board
MARITIME RESOURCES CORP.
1900-110 Yonge St., Toronto, ON M5C 1T4
Garett Macdonald, President and CEO

Certain information included in this press release, including information relating to future financial or operating performance and other statements that express the expectations of management or estimates of future performance constitute "forward-looking statements". Such forward-looking statements include, without limitation, statements regarding copper, gold and silver forecasts, the financial strength of the Company, estimates regarding timing of future development and production and statements concerning possible expansion opportunities for the Company. Where the Company expresses or implies an expectation or belief as to future events or results, such expectation or belief are based on assumptions made in good faith and believed to have a reasonable basis. Such assumptions include, without limitation, the price of and anticipated costs of recovery of, copper concentrate, gold and silver, the presence of and continuity of such minerals at modeled grades and values, the capacities of various machinery and equipment, that the use of ore sorting technology will produce positive results, the availability of personnel, machinery and equipment at estimated prices, mineral recovery rates, and others. However, forward-looking statements are subject to risks, uncertainties and other factors, which could cause actual results to differ materially from future results expressed, projected or implied by such forward-looking statements. Such risks include, but are not limited to, uncertainty as to whether this financing will be completed, interpretation and implications of drilling and geophysical results; uncertainty as to whether mineral resources will ever be converted into mineral reserves once economic considerations are applied, uncertainty as to whether inferred mineral resources will be converted to the measured and indicated categories through further drilling, or into mineral reserves, once economic considerations are applied, estimates regarding timing of future capital expenditures and costs towards profitable commercial operations. Other factors that could cause actual results, developments or events to differ materially from those anticipated include, among others, increases/decreases in production; volatility in metals prices and demand; currency fluctuations; cash operating margins; cash operating cost per pound sold; costs per ton of ore; variances in ore grade or recovery rates from those assumed in mining plans; reserves and/or resources; the ability to successfully integrate acquired assets; operational risks inherent in mining or development activities and legislative factors relating to prices, taxes, royalties, land use, title and permits, importing and exporting of minerals and environmental protection. Accordingly, undue reliance should not be placed on forward-looking statements and the forward- looking statements contained in this press release are expressly qualified in their entirety by this cautionary statement. The forward-looking statements contained herein are made as at the date hereof and the Company does not undertake any obligation to update publicly or revise any such forward-looking statements or any forward-looking statements contained in any other documents whether as a result of new information, future events or otherwise, except as required under applicable security law.

To view the source version of this press release, please visit https://www.newsfilecorp.com/release/46682