Not for distribution to U.S. newswire services or for dissemination in the United States. Any failure to comply with this restriction may constitute a violation of U.S. securities laws.

TORONTO, ON / ACCESSWIRE / November 7, 2018 / Minfocus Exploration Corp. (TSX-V: MFX) ("Minfocus" or "Company") is pleased to announce that seven (7) different grab samples, from its initial exploration work program at the Round Pond Zinc Project in Newfoundland, taken from multiple locations have returned assays ranging from 12.8% up to 39.2% combined Zinc+Lead. The seven samples collected and submitted were collected over a nominal distance of 1 km, covering both the historic Round Pond main zone, as well as the Philips Prospect to the southwest of the main Round Pond showing.

Analyses of Round Pond Grab Samples

During the initial field program at the Round Pond Zinc Project (see October 12, 2018 news release), a total seventeen (17) samples were collected to represent a range of lithologies from which seven (7) mineralized samples (including sample RP02, see photo below) were submitted for multi-element assay. The principal style of mineralization was breccias with cement, weathering proud of exposed surfaces, dominated by granular sphalerite of a pale greyish-green colour. Granular galena and scattered pyrite are uncommon, and were the only other sulphides observed.

All analyses were performed by Activation Laboratories Ltd, Ancaster, ON by Na2O2 Fusion-XRF analyses.

The Round Pond zinc project is a 1,575-hectare group of claims located on the Great Northern Peninsula of northwest Newfoundland. The region has seen extensive, episodic programs of exploration for zinc since the 1960s. The principal target is Mississippi Valley-Type (MVT) Zn-(Pb-Ag) mineralization, as found at Teck Corporation's former Newfoundland Zinc Mine at Daniel's Harbour, about 150 km to the south. Mineralization appears to be widespread, in rocks of simple mineralogy (dolomite + sphalerite ± calcite ± galena ± pyrite ± quartz ± hydrocarbon ± K-feldspar). The Round Pond Zinc Project is comparable in area to the largest of the deposits seen at the historic Newfoundland Zinc Mine.

History of Round Pond Zinc Project

In 1970, Cominco identified "widespread zinc geochemical anomalies over a 13 square-mile [33.6 km2] area" with "the highest grade and greatest concentration of values … in the vicinity of the Round Pond." Subsequent drilling of the anomalies by Cominco reported extensive zinc mineralization with 59 of 82 drill holes intersecting visible sphalerite. The best holes found by Cominco included 22 feet (6.7 metres) grading 3.3% zinc and 10 feet (3.0 metres) grading 6.4% zinc. Following up on the Cominco work, Narex Ore Consultants completed a drill program in 1983 at Round Pond comprising 26 holes of just under 2,100 feet (640 metres) of drilling. The Narex drilling, combined with the previous Cominco work, indicated the presence of a "pod" of zinc mineralization of approximately 400,000 tons (364,000 tonnes) grading 2.0% zinc (a historic resource not NI43-101compliant). Based on the presence of "… sections of solution breccia together with minor sphalerite in many holes", Narex suggested, "that several similar sized or larger 'pods' could well be found in the vicinity of Round Pond."

Thomas Edison tried to develop batteries made with zinc 100 years ago. But he did not figure out how to make them technologically viable. Recent reports suggest that scientists at one commercial battery producer say they have achieved two key goals: to make the batteries rechargeable, and to lower their cost for energy storage to $100 per kilowatt-hour. That is a figure that some people in the industry have said is essential to creating a carbon-free electric grid that operates even when the sun is down and the wind abates.

Zinc air batteries are one of several potential alternatives to lithium-ion batteries, which have been the focus until now for large-scale power storage and electric vehicles. Materials like lithium are costly, in part, because they are relatively rare. A recent Sept 26th, 2018 New York Times article noted that the current reserves of zinc are about twenty times the reserves of lithium, but cautioned that at the present rate of production of zinc, zinc reserves will last about 25 years, so it is not clear we will have enough zinc to support the enormous need that will result from the demand for grid-scale batteries.

Further to the Company's August 31, 2018 news release announcing an extension of a the previously announced non-brokered private placement financing and amendment of the terms of it to include up to 15,000,000 units and gross proceeds of up to $750,000, the Company announces it has withdrawn the financing and will no longer be proceeding with this non-brokered private placement financing. 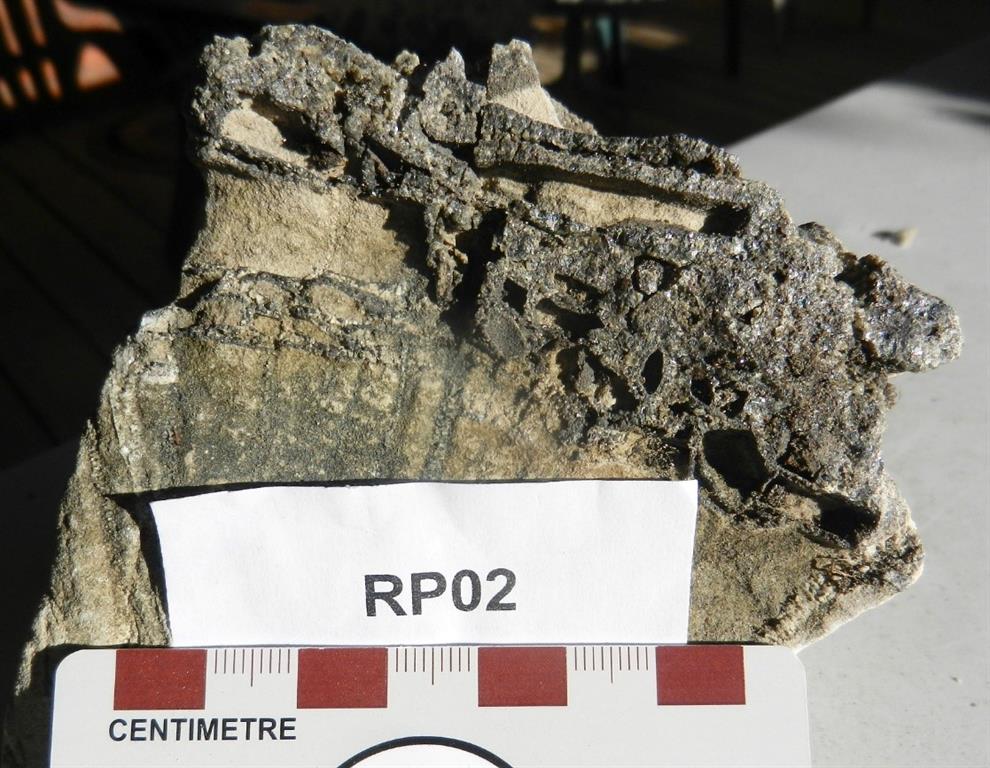 Figure 1. Sample RP02, assayed 35.4% Zn and 3.81% Pb, is one of the specimens of dolostone "crackle breccia" from Round Pond, with dolostone clasts in a cement of pale greenish, granular sphalerite, which often weathers out and stands proud of the carbonate host rock. In most samples, other sulphides such as galena, pyrite and marcasite appear to be absent, or subordinate to sphalerite.

Minfocus continues to target Mississippi-Valley-Type ("MVT") carbonate-hosted zinc and lead deposits. These MVT deposits, compared to other types of zinc deposits (Sedex and VMS), are typically metallurgically simpler to process and are the source of the higher quality zinc concentrates that are preferred by custom zinc smelters due to the exceptionally pure high-grade zinc concentrates produced (up to 63% zinc in concentrates and low-iron with minor impurities).
In 1975, Teck started commercial production at the Newfoundland Zinc Mines from an initial proven deposit with 4.45 million tons of 8.78% zinc ore. The ore was exposed at the surface and was accessed by open pits and inclined ramps which combined to result in an initial low-cost 1,500 ton per day mining and milling operation that operated until 1990 after producing a total of 7.22 million tons of ore averaging 7.93% zinc over the life of the Newfoundland Zinc Mine. 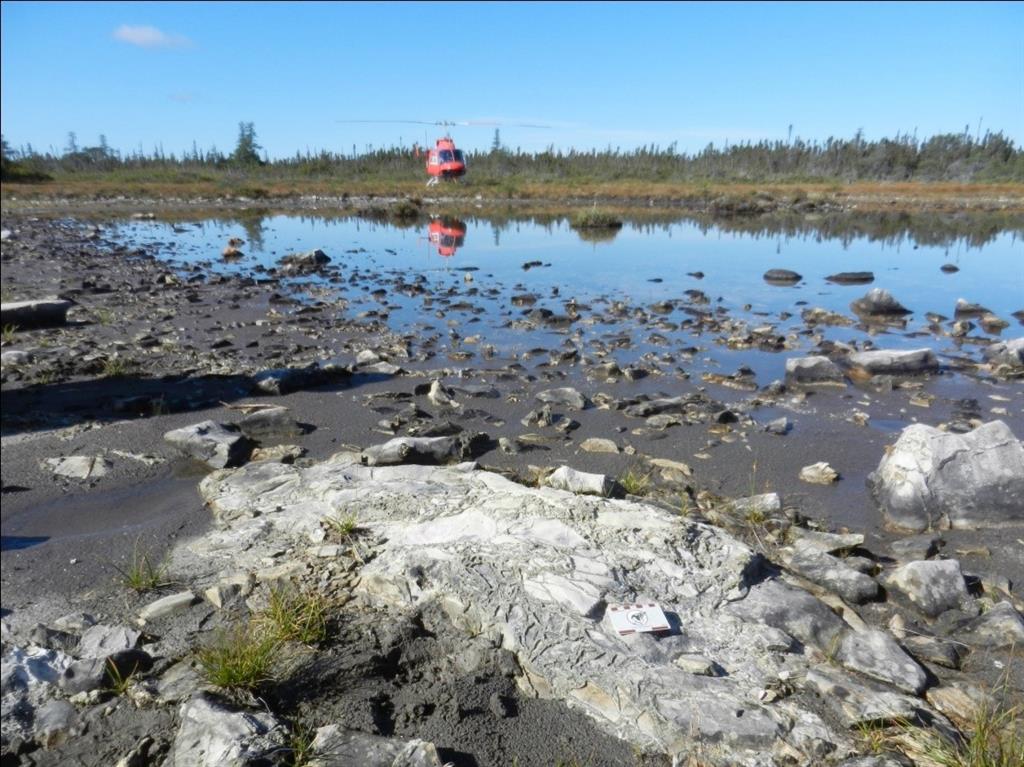 Figure 2. Westward view, on the north side of the principal stripped showing at Round Pond, showing a metre-scale block of sphalerite-bearing, brecciated dolostone. Evidence of zinc mineralization is widespread on the property.

Minfocus Exploration Corp. is a Canadian company currently advancing a portfolio of base-metal projects including three Mississippi-Valley-Type zinc projects in British Columbia and Newfoundland and a Platinum Group Element ("PGE")-enriched Ni-Cu-Pt-Pd project in N.W. Ontario. Minfocus has a successful management group with a record of multiple discoveries of deposits worldwide, including gold and uranium deposits in Mongolia and PGE-rich resources in Ontario, including the discovery of the first platinum-rich Ni-Cu-Pt-Pd deposit in the Midcontinent Rift, the Current Lake deposit.

The Qualified Person who has reviewed and approved the technical content contained in this release is Dr. Graham C. Wilson, P.Geo.(Ont), a director of Minfocus.

This press release includes certain forward-looking statements concerning the future performance of the Company's business and operations as well as management's objectives, strategies, beliefs and intentions. Forward-looking statements are often identifiable by the use of words such as "may", "will", "might", "would", "plan", "believe", "expect", "anticipate", "intend", "estimate", "scheduled", "forecasts" and similar expressions or variations (including negative variations) of such words and phrases. Forward-looking statements are based on the current opinions and expectations of management, and are subject to a number of risks and uncertainties that may cause actual results, performance or achievements of the Company to be materially different from those currently anticipated by such statements. Factors that could cause actual results or events to differ materially from current expectations include, among other things, the possibility that future exploration results will not be consistent with the Company's expectations, fluctuating commodity prices, delays in commencing the Company's proposed drilling program, exploration costs varying significantly from estimates, the availability of financing, and other risks identified in the Company's documents filed with the Canadian securities regulatory authorities at www.sedar.com. Any forward-looking statement speaks only of the date on which it is made, and except as may be required by applicable securities laws, the Company disclaims any intent or obligation to update any forward-looking statement.