TORONTO, ON / ACCESSWIRE / December 1, 2020 / Murchison Minerals Ltd. ("Murchison" or the "Company") (TSXV:MUR) today announced that it has identified 10 high-priority drill targets on its Brabant Lake VMS exploration project. Observations generated from extensive ground exploration over the past several years suggest that sphalerite (zinc sulphide) mineralization in conjunction with pyrrhotite (iron sulphide) weathers preferentially, sometimes very rapidly, when exposed to atmospheric conditions as compared to much more weathering-resistant copper, silver and gold bearing mineralization. The weathering of originally high-grade sphalerite mineralization could naturally lead to the creation of low-lying areas (bogs/swamps) overlying VMS orebodies. This observation may have a significant impact on future results by focusing exploration on the EM conductors spatially linked to overlying swamps/bogs and proximal to surface copper/silver mineralization.

Murchison is planning to conduct a reverse circulation (RC) drill program this winter which will drill multiple short holes (50-100 metres) across ten (10) identified high-priority targets primarily selected by the combination of swamps/bogs overlying EM conductors spatially linked to nearby copper/silver bearing weathering resistant mineralization. The RC drilling will test for elevated base and precious metals and will be used to prioritize targets for diamond drilling.

Murchison has currently identified approximately 120 airborne EM conductors across the Brabant Lake Project from geophysical surveys in 2012, 2018 and 2020. Field prospecting in 2019 and 2020 using a Beep Mat to ground truth the surface expression of the EM conductors has verified that many of the airborne EM conductors correlate with low-lying swampy areas. These swamps are a challenge to our geologists in locating, sampling and mapping the actual rock formations on surface to explain the source of these underlying EM anomalies.

Murchison recently reported a discovery of zinc, silver, gold and lead mineralization at Street Lake on the Brabant Lake Project, where grab samples collected in extremely weathered rock assayed up to 0.58% Zn, 0.17% Pb and 32.4 g/t Ag. Similar silver grades are observed in the Brabant-McKenzie Deposit.

These grab samples were collected from an extremely weathered outcrop at Street Lake where the rock has degraded almost entirely to rust coloured silt and sand. The observed weathering was primarily affecting the mineralized zone and it is assumed that the oxidation of the samples has preferentially decreased the zinc content of the primary rock. This phenomenon was also noted in 2019, when evaluation of historic drill cores from the Brabant-McKenzie Deposit found intense preferential weathering in intervals of sphalerite (zinc) and pyrrhotite (iron) mineralization. These previously un-weathered mineralized intervals (in freshly drilled core) had been exposed to outside conditions for approximately 10 years and had degraded entirely to rubble, similar to the mineralization discovered at Street Lake. Murchison theorizes that the rapid degradation of sphalerite bearing rock (zinc) in particular, when exposed to the elements (water, air, freezing etc.), can erode quickly under certain conditions, leaving surface depressions (known as bogs, swamps, muskegs).

It is believed that the mechanism for the extreme weathering of sphalerite-bearing sulphide rock is acid rock drainage (ARD) and that the weathering of the pyrrhotite (iron sulphide) in the rock lowers the pH of the weathering fluid and produces iron (III) as an oxidizing agent. Low pH conditions and the presence of iron (III) causes the sphalerite to decompose rapidly as it is unstable in low pH environments. The dissolution of the sphalerite compromises the strength of the rock and exposes more pyrrhotite which weathers the rock increasingly faster until the near surface zinc mineralization has entirely leached/eroded away.

Murchison has observed conversely that zones of barren sulphide rock composed entirely of pyrrhotite weathers much slower and thus is inferred to be more resistive to weathering and more likely to be better exposed at surface. By comparison, the high grade consisting principally of chalcopyrite (Cu) and sphalerite (Zn) surface mineralization of the Main Lake Showing shows little weathering as it lacks significant pyrrhotite. Similarly, the Brabant-McKenzie Deposit appears to be only exposed on surface where the mineralized rock has been silicified preventing the sphalerite and pyrrhotite from weathering.

VMS deposits, being rich in various metals, can be detected using modern geophysical tools that detect the magnetic and electrical conductivity of the metal-bearing geological formations in the form of conductive (EM) anomalies. Hence the combination of geophysics EM conductors spatially linked to overlying bogs/swamps can become a powerful combination by focusing zinc exploration efforts on the most prospective targets.

Murchison's prospecting programs in 2019 and 2020 have revealed that a significant number of the electromagnetic (EM) conductors identified in recent airborne surveys correspond with intervals of significant bogs often associated with grab samples assaying up to 0.618% Cu. The presence of copper combined with the lack of zinc supports/confirms our theory that the original zinc has weathered out leaving the more resistant copper mineralization behind. It is inferred that these low-lying areas which correspond with areas of moderate conductance are high-priority exploration targets for zinc-bearing VMS mineralization. 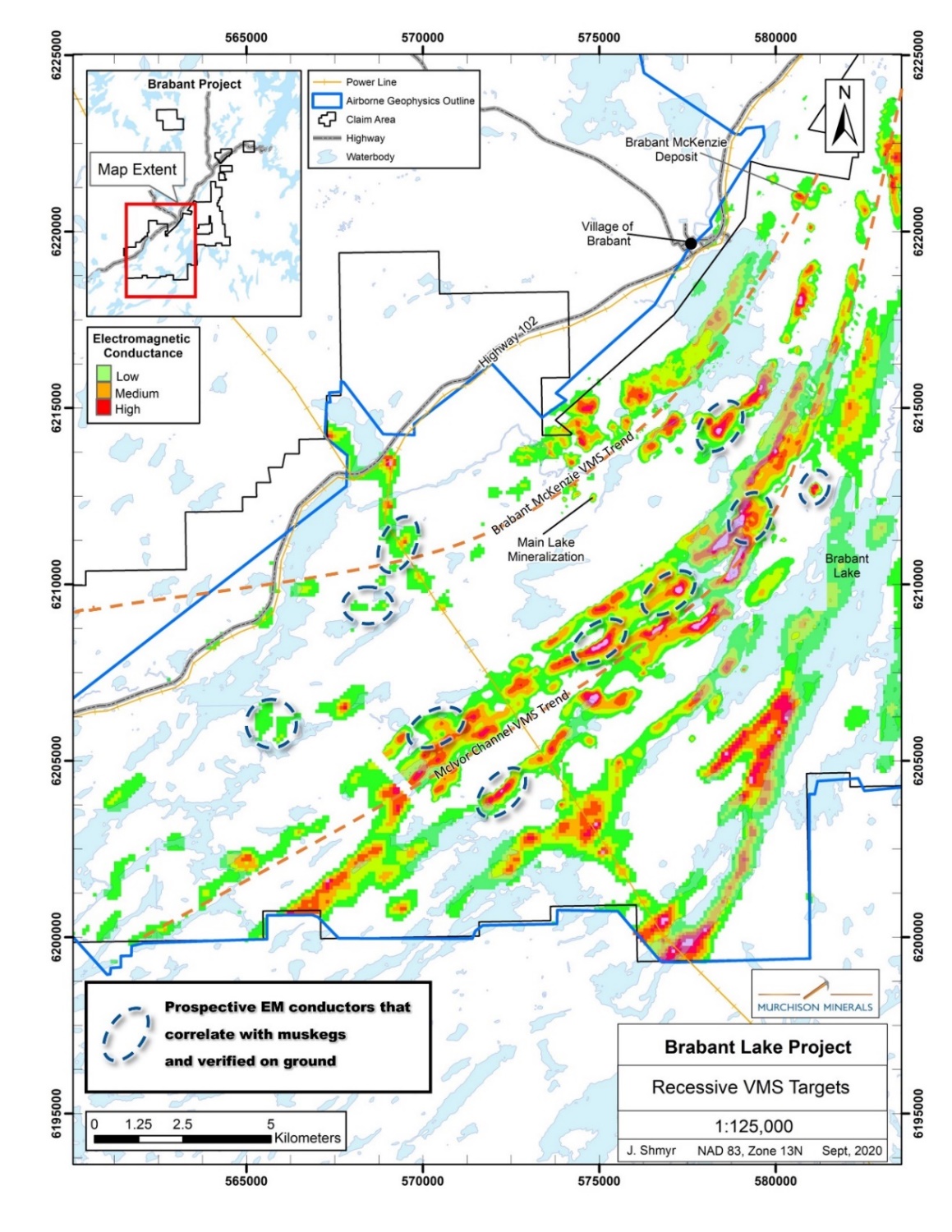 Map showing 10 EM conductors that correlate with bogs or muskegs 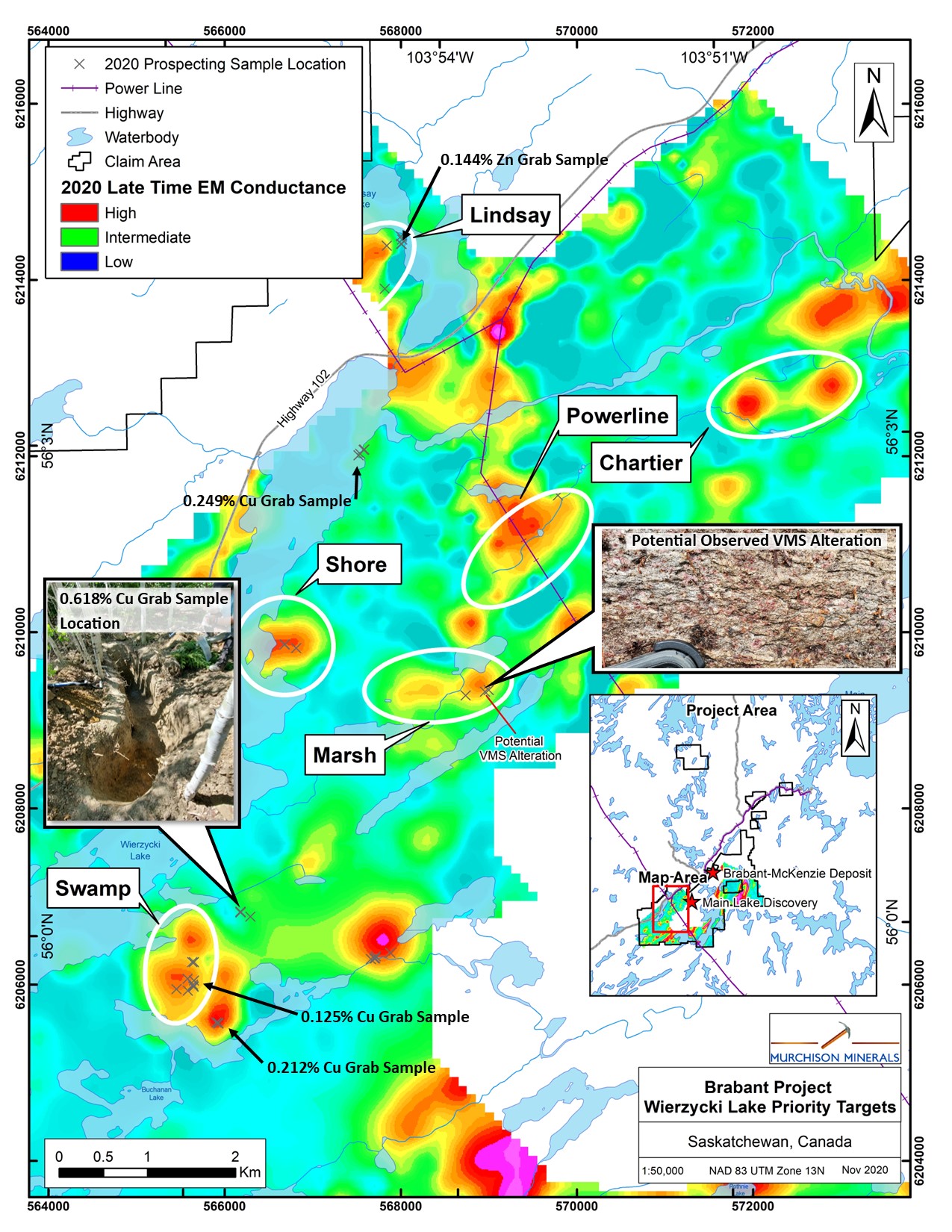 Map of high-priority targets observed in the Wierzycki Lake area

This EM conductor is in a low-lying marshy area located 1 km off the eastern shore of Wierzycki Lake. Prospecting in 2020 observed potential metamorphosed VMS style alteration indicated by abundant large garnets and potential cordierite in a biotite schist on the edge of the marsh. This potential VMS type alteration is observed at both the Brabant McKenzie Deposit and in the Main Lake Discovery hole and elevates the target as high priority. Modelling of this EM anomaly produced an E-W trending conductive body approximate 1.2 km in strike length that plunges to the west. Its eastern shallowest section is in close proximity to the potential metamorphosed VMS style alteration identified in the field.

This EM conductor trends North-South near the southeast of Wierzycki Lake. Beep Mat reconnaissance in the summer of 2020 has produced grab samples up to 0.6% Cu with associated pyrrhotite in graphitic gneiss and pegmatite 350 metres away and approximately along strike. The area is geophysically complex, but a low swampy area correlates well with the location of a conductor. 2020 sampling directly south of the conductor adjacent to this swamp discovered weak pyrrhotite mineralization with grab samples assaying up to 0.125% Cu. This area is considered highly prospective.

This EM conductor is located approximately 2 km east of Wierzycki Lake striking to the North-East. A powerline located immediately west of the conductor creates EM noise that prevents the effective estimation of its strike length. Prospecting in 2020 indicates that the conductor corresponds with a low-lying area and a river. This target is along the Brabant-McKenzie trend which elevates the targets potential.

The Lindsay target correlates with a historic disseminated pyrrhotite-pyrite occurrence discovered in 1959 by the Saskatchewan Geologic Survey (SGS). Thin section analysis by the SGS observed minute grains of chalcopyrite and sphalerite mineralization. The target has seen limited historic exploration with limited prospecting in 1989 with the samples never submitted for assay. Prospecting by Murchison in the summer of 2020 relocated the showing. Beep Mat prospecting discovered additional nearby buried pyrrhotite-pyrite mineralization which assayed up to 0.144% Zn. This zinc mineralization is considered highly anomalous and indicates potential for VMS mineralization along strike.

The area is located in close proximity with a recently defined airborne EM conductor with a coincident magnetic high response flown during the winter of 2020. A powerline located immediately southwest of the conductor creates EM noise that prevents the effective estimation of its strike length. However, the coincident magnetic high response is still present 400 m to the southwest.

This EM conductor correlates well with a swampy area and is on strike with semi-massive pyrrhotite observed at Pete's Point during the summer of 2019. Grab sampling of disseminated pyrrhotite discovered in 2019 immediately to the southwest of the bog assayed as high as 0.124% Cu and as high as 0.08% Zn which is considered elevated above background. This area is marked as high priority for drill testing.

The Shore EM conductor sits on the eastern shore of Wierzycki Lake. The surface expression of this conductor has not been located and appears to be buried beneath significant glacial till. Modelling of this conductor has produced an E-W striking north dipping body approximately 800 m in strike length and 300 m in width at a depth of 172 m.

This cluster of conductors is proximal to the Main Lake and Main Lake West areas which display VMS style mineralization and alteration. Prospecting in 2020 indicates the area is buried by significant glacial till but it did produce a response on the beep mat. The source of the beep mat anomaly was not discovered due to the thick glacial overburden but does correspond well the airborne geophysical conductor. Modelling produced six conductors distributed over a strike length of approximately 1.3 km. The proximity of this geophysical target to the Main Lake showing area elevates it as high priority.

The McIvor channel showing consists of semi-massive pyrrhotite discovered in 1929 by B. Barker on the eastern shore of Brabant Lake. The showing mineralization has been traced over 600 m. The showing has not been historically drill-tested but has been trenched and sampled on surface. Historic surface sampling describes observing minor chalcopyrite, sphalerite as well as hydrozincite. The showing was relocated and sampled in the summer of 2019 by Murchison. The 2019 sampling returned assays as high as 0.298% zinc, 0.096% copper and 7 g/t silver. Airborne EM data collected by Murchison in 2019 suggest that the McIvor Channel associated conductor has a strike length of approximately 2.6 km.

The observed mineralization can be traced into Brabant Lake where two EM conductors are observed. Another conductor occurs just east of the McIvor conductor and corresponds with a long muskeg area and may indicate recessive weathering. The observed proximal zinc, copper and silver mineralization elevates this area significantly as having potential to host VMS mineralization and is rated as a high-priority drill target. Airborne EM data collected by Murchison in 2019 suggest that the McIvor Channel associated conductor has a strike length of approximately 2.1 km.

The Brabant-McKenzie project is located 175 kilometres northeast of La Ronge, Saskatchewan and approximately three kilometres from the community of Brabant Lake. The area is accessed year-round via provincial Highway 102 and is serviced by grid power. The project consists of one mining lease, which hosts the Brabant-McKenzie VMS deposit, and additional mineral claims totalling 627 square kilometres, which cover approximately 57 kilometres of strike length over favourable geological horizons, multiple known mineralized showings and identified geophysical conductors.

Murchison is a Canadianbased exploration company focused on the exploration and development of the 100% owned BrabantMcKenzie zinccoppersilver project in northcentral Saskatchewan. The Company also has a 100% interest in the HPM nickelcoppercobalt project in Quebec. Murchison has 78.7 million shares issued and outstanding.

Additional information about Murchison and its exploration projects can be found on the Company's website at www.murchisonminerals.com. For further information, please contact: