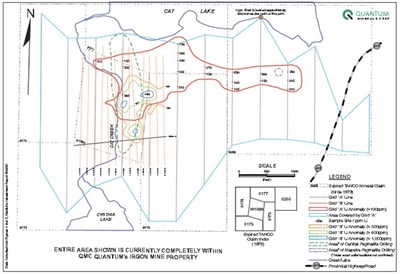 Balraj Mann, CEO, commented, "Macquarie Group recently stated the lithium market is moving to a deficit in 2022 with material shortages emerging in 2025.  Lithium hydroxide prices are expected to top $16,000 per tonne.  Moreover, as the amount of cobalt in batteries is reduced, the lithium component within must be increased."

The historic assessment report (Manitoba Mines Branch: #92681) documents a litho-geochemical soil survey that was conducted by TANCO for the purpose of delineating buried, undiscovered tantalum-bearing pegmatite structures that may occur south of Cat Lake between the known Central Pegmatite on the west and the Mapetre Pegmatite to the east. Two survey grids were laid out. The larger grid (Grid "A" below), established on a 150 x 500-foot grid pattern, confirmed that a very intense, widespread lithium geochemical soil anomaly is situated between the Central and Mapetre Dikes covering an east/west distance of approximately 1100 metres with a width of 100 metres at the east end, widening to approximately 350 metres at the west end.  TANCO reports lithium results within this anomaly to be up to 630 ppm Li.

The second grid (Grid "B") established a tighter, 150 x 150-foot grid pattern over the western portion of the Grid "A" anomaly.  The purpose of Grid "B" was to again identify additional pegmatite mineralization in extensions of, or parallel structures to the Central Dike. Results of the lithium soil geochemistry were highly anomalous as several areas reported over 1,000 ppm lithium concentrations with a widespread lithium anomaly showing > 300ppm Li and remaining open ended to the east.

The location of both these grids and the data TANCO produced are reproduced in the figure below.

In the assessment report, TANCO geologists state that the "breath and length of this lithium anomaly is such that it cannot be accounted for by the known pegmatites in the area."  TANCO geologists strongly recommended that the company explore both these target areas with additional drill programs; however, at the time, tantalum was TANCO's metal of choice and the company had no interest in producing lithium.  The assessment report was prepared by D.L. Trueman, P. Eng. for the Tantalum Mining Corporation of Canada Limited ("TANCO") and was dated 1979.

QMC's exploration work programs have confirmed the presence of significant mineralization within the Mapetre and Central pegmatite dikes.  QMC crews identified large crystals of spodumene mineralization on the Mapetre where a 1.5-metre-long chip sample assayed 2.47% Li2O.  Chip samples from the Central assay returns were from 1.42% to 4.16% Li2O.  QMC also had TANCO drill core assayed for lithium.  The best Mapetre Dike intersection was 0.32% Li2O over 16.61 metres, including 0.52% Li2O over 8.69 metres.  The best intersection from the Central Dike was 1.28% over 3.81 metres, including 2.97% Li2O over 1.22 metres.  Two additional sample intervals from drill holes on the Central Dike re-assayed 1.50% Li2O over 1.52 metres and 1.04% Li2O over 1.52 metres.

The technical content of this news release has been reviewed and approved by Bruce E. Goad, P. Geo., a qualified person as defined by National Instrument 43-101.

QMC is a British Columbia based company engaged in the acquisition, exploration and development of resource properties. Its objective is to acquire, locate and develop economic deposits within the company's precious, base, rare metal resource properties of merit. The Company's current properties include the Irgon Lithium Mine Project and two VMS properties, the Rocky Lake and Rocky-Namew, known collectively as the Namew Lake District Project. Currently, all of the Company's properties are located in Manitoba.

On behalf of the Board of Directors of