2 Car Stocks That Could Zoom Higher On a Short Squeeze

Even as the major stock indexes flirt with record highs, short sellers have been coming out of the woodwork lately. Short interest on S&P 500 Index (SPX) stocks has crept steadily higher for most of 2017, and now sits at the highest point since before the presidential election, after rising another 4.06% in the last reporting period. Among the stocks that could see short covering soon, according to our internal screener, are used vehicle retailer CarMax, Inc. (NYSE:KMX) and rental car provider Hertz Global Holdings, Inc (NYSE:HTZ).

According to Schaeffer's Quantitative Analyst Chris Prybal, short interest on S&P stocks is now higher than 82.3% of all other readings from the past year. Going five years out, short interest is near the 80th percentile of its annual range. You'll note on the chart below that these bearish bets peaked just after the early 2016 stock market pullback, which preceded a record-setting rally for the SPX, as bears scrambled to cover. 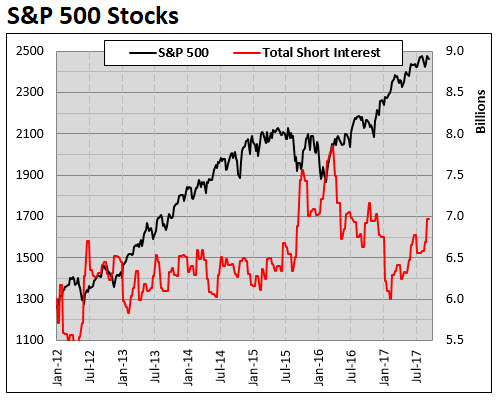 Meanwhile, Schaeffer's Senior Quantitative Analyst Rocky White ran a screen attempting to find stocks that could enjoy a short squeeze soon. Among some of the criteria the stocks must have: short interest that's increased by at least 25% since its low over the past year; and shorts at an estimated loss of at least 8%. As alluded to earlier, CarMax and Hertz Global stocks popped up on our list.

KMX Short Interest Would Take 13 Days to Buy Back

Since touching a two-year low in early 2016, KMX stock has been in a channel of higher lows and highs, with recent pullbacks contained by its 200- and 320-day moving averages. The shares on Wednesday notched a record peak of $75.82, surpassing their previous all-time high, touched in April 2015. At last check, CarMax shares were down 0.3% at $75.11. 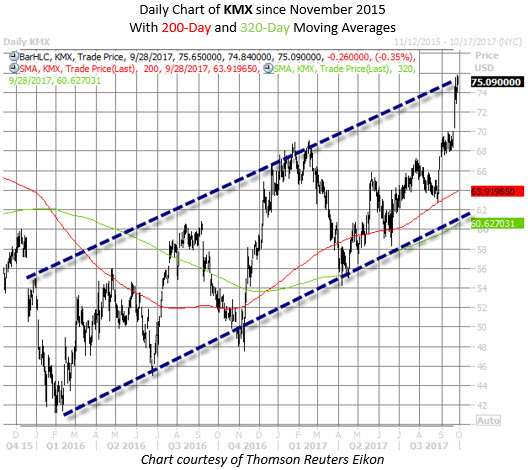 Currently, short interest on KMX stock represents nearly 14% of the equity's float, accounting for 24.3 million CarMax shares. Since its low of the past year, short interest has moved 29% higher, and would now take nearly 13 sessions to buy back, at KMX's average daily trading volume. Based on White's calculations, the average CarMax short is facing a loss of about 22.4%. A short squeeze could propel the equity even higher on the charts.

Upbeat analyst attention could also fuel KMX stock higher. Despite the stock's long-term uptrend, only half of the brokerage firms following the shares rate them a "buy" or better, leaving the door wide open for potential upgrades to lure even more buyers to the table.

HTZ stock fell to its lowest price since March 2009 in mid-June, bottoming at $8.52. Since then, however, Hertz Global stock has nearly tripled, and is attempting to take out the $24 region, which has acted as a ceiling in 2017. The security was last seen fractionally higher at $23.76.

This, even as short sellers bombarded Hertz. Since its low of the past year, short interest has skyrocketed 245%, per White, with the shorts now facing an average loss of 55.4%. Now, short interest represents more than 26 million Hertz Global shares, or 31.1% of the equity's total available float. If shorts jump ship, HTZ shares could extend their recent rally.

As with KMX, analysts have yet to board the bullish bandwagon on Hertz stock. Not one of the five brokerage firms following HTZ deems it worthy of a "buy" or better endorsement. If the rental car concern can extend its upward momentum, a round of upbeat analyst attention could be a boon for HTZ.