The recently released BP Statistical Review of World Energy registered new all-time highs for the production and consumption of oil and natural gas, and for fossil fuels as a whole. But the story for coal was much different. In fact, 2015 brought the biggest drop in coal demand since 1965, the first year the BP Review began tracking energy statistics.

How bad was 2015 for the coal industry? Since 1965, annual coal demand has only declined by more than 50 million metric tons of oil equivalent (MMtoe) twice. Following the global financial crisis demand fell by just over 50 MMtoe in 2009, and then last year it tumbled by 71.3 MMtoe. 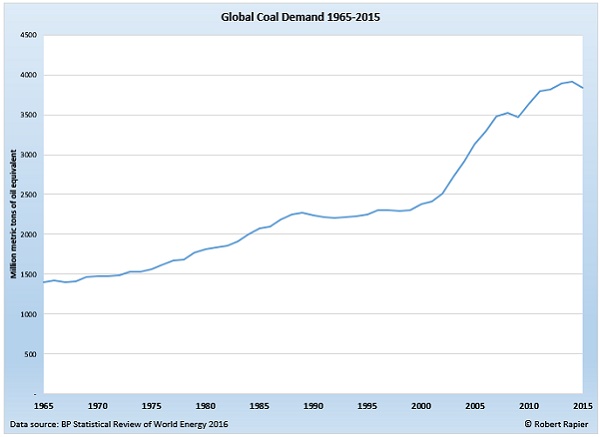 Following the 2009 decline, coal demand growth returned to the robust rates of 2003-2007. But is that pattern likely to repeat this time? Let's take a closer look at the global coal market.

China has long been the world's largest producer and consumer of coal. In 2015, its 1,920 MMtoe of coal consumption accounted for half the global total. China's coal consumption grew for 15 straight years until 2014, increasing even during the 2008 financial crisis.

But now Chinese coal demand has declined for two straight years. The 29 MMtoe demand decline in 2015 was the largest on record, and was the result of flat power industry demand, higher production of renewable power, an increase in natural gas consumption, and a huge increase in nuclear power (+29%) production.

The U.S. had been the world's second-largest consumer of coal, but the decline of its coal demand in 2015 - the largest in the world at 57 MMtoe - dropped the U.S. to third place among the world's coal consumers. In fact, the primary reason for the huge global demand drop for coal in 2015 was the sharp decline in U.S. coal demand. This also resulted in the U.S. having the largest decline of any country in carbon dioxide emissions in 2015. This will be the topic of an upcoming article.

The country vaulting past the U.S. into second place in coal demand rankings last year was India. Over the past decade, U.S. coal demand has dropped nearly 30%, while India's has doubled. Of course India has a much larger population than the U.S., so we are still well ahead on a per capita demand basis, but still behind China on that measure. In any case, India's appetite for coal doesn't seem likely to abate any time soon: 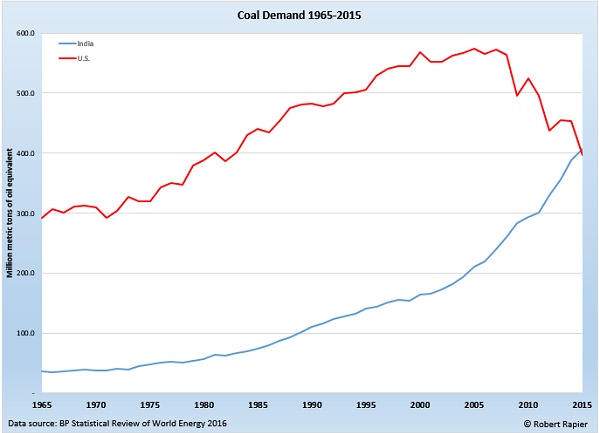 So what do the 2015 trends mean for the U.S. and the global coal industry? One factor depressing U.S. demand for coal in 2015 was extremely cheap natural gas. That competing fuel has remained inexpensive thus far in 2016, but very recently prices have finally rebounded a bit. Costlier natural gas would give the power producers who can switch back to coal an incentive to do so.

Most of the countries with the substantial supply/demand imbalances in the coal market are located in the Asia Pacific region. India, Japan, and South Korea are the major Asian coal importers, while Australia and Indonesia export the bulk of their coal output.

US coal producers are at a geographic disadvantage to Australia and Indonesia when it comes to supplying India, China, Japan and South Korea, so it may be hard for them to compete in these markets.

Global coal demand may have peaked, but we can only know this with a few years of hindsight. In any case, China is pretty desperate to rein in its coal consumption, while India looks set to continue its long run as the coal consumer whose demand is growing fastest. China's demand fell in 2015 more than India's demand grew, but the Asia Pacific region as a whole saw coal consumption tick up by 0.2%.

In the U.S., I see the industry continuing its slow decline. It's not a sector for the timid, but certain coal producers are positioned to persevere and profit from their rivals' troubles. We discussed two such opportunities in the most recent issue of The Energy Strategist.