Excess Money Supply Has Been Like Miracle-Gro for Gold Prices

The $2.2 trillion coronavirus relief package that President Donald Trump signed into law on March 27 is just the beginning. The Treasury Department is now seeking some $250 billion more to replenish small business loans, and there's hope that the president and House Democrats can agree on a Phase Four spending deal, one that may target infrastructure. Trump has asked for $2 trillion.

And that's just the U.S.

According to Evercore ISI's Ed Hyman, as many as 285 stimulus measures have been announced around the world in the past eight months, the most ever by a wide margin. Japan, which only this week declared a state of emergency, approved a $1 trillion relief package on Tuesday.

Last month I predicted that at least $10 trillion would be spent to mitigate the economic impact of this virus, and it appears as though we're already there, with much more to go. And this is all before considering monetary stimulus in the form of near-zero rates and quantitative easing (QE).

The U.S. economy is being flooded with excess money and liquidity right now. Compared to the same period a year ago, M2 money supplywhich includes not just cash but also savings deposits, money market funds and other near moneyhas increased some 12 percent, the most in more than 10 years.

All this excess liquidity has to go somewhere, and historically it's acted as Miracle-Gro for gold prices. Look at the chart below. There's a clear correlation between the annual growth rate in M2 money supply and the price of the yellow metal. In the times when money supply surged from the same period a year earlier, gold prices followed.

Gold touched its all-time high of $1,900 an ounce in 2011 when M2 money supply growth soared above 10 percent year-over-year. With supply growth now at 12 percentand likely headed higherliquidity has flowed into physical gold as well as paper gold. On Monday, spot gold traded above $1,700 for the first time since December 2012. The next test, I believe, is $2,000, and as I've said before, $10,000 gold isn't crazy.

Global exchange-traded funds (ETFs) backed by physical gold notched a new all-time record in the first quarter of 2020, attracting 298 metric tons, or net inflows of $23 billion, for a total of more than $164 billion, according to a report by the World Gold Council (WGC). That's the highest ever in U.S. dollar terms for a quarter and the most in tonnage terms since the first quarter of 2016, after the start of the current gold bull market.

The WGC expects the recent drivers of gold to persist, including widespread market uncertainty and the improved opportunity cost of holding gold as yields move lower.

With the Fed taking interest rates to zero for the foreseeable future, gold could do well as it tends to outperform during easing cycles, the group writes. Additionally, multi-trillion dollar fiscal stimulus policies to combat the economic impact of COVID-19 could prove inflationarya development that could support gold prices in the long run.

So far inflation in the U.S. has been moderate, despite earlier expectations that Trump's tariffs and the U.S.-China trade war would push up consumer prices. But I agree that the global $10 trillion+ stimulus effort will have a noticeable impact on the prices of goods and services, which could be constructive for gold.

There are other ways to get exposure to gold and precious metals, of course. I believe the best way is with royalty and streaming companies, led by heavyweights Franco-Nevada, Wheaton Precious Metals and Royal Gold, with a combined market cap of close to $40 billion as of April 7.

These companies, as I've shared with you many times before, are not the ones spending money to develop a project. They simply put up the capital, and in exchange, they enjoy either a royalty on whatever the miner produces or rights to a stream of metal supply at a fixed, lower-than-average cost.

While they enjoy a lot of the upside potential when gold prices are rising, royalty companies share very little of the downside potential with producers and explorers when the metal is in decline. Royalty companies are better insulated from bear markets because they have a diversity of high-quality active mines in their portfolio.

The superiority of their business model can be seen in the chart below. Whereas the universe of publicly traded precious metal miners had an average gross profit margin of 20.7 percent as of December 2019, the three top royalty and streaming companies had one of 45.7 percent, or more than twice the amount. This, I believe, gives them an adequate cushion to weather the coronavirus downturn. 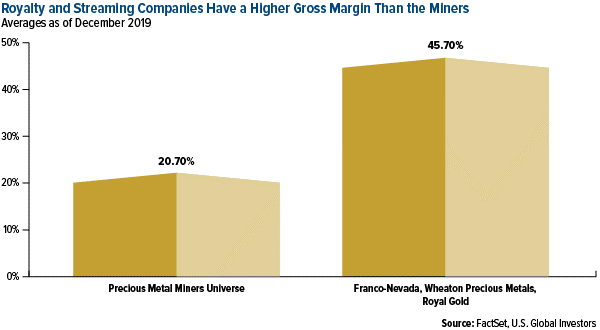 For more on this topic, read this post, Supercharge Your Gold Position With Precious Metal Royalty Companies!

All opinions expressed and data provided are subject to change without notice. Some of these opinions may not be appropriate to every investor. Some links above may be directed to third-party websites. U.S. Global Investors does not endorse all information supplied by these websites and is not responsible for their content. U.S. Global Investors, Inc. is an investment adviser registered with the Securities and Exchange Commission ("SEC"). This does not mean that we are sponsored, recommended, or approved by the SEC, or that our abilities or qualifications in any respect have been passed upon by the SEC or any officer of the SEC. This commentary should not be considered a solicitation or offering of any investment product. Certain materials in this commentary may contain dated information. The information provided was current at the time of publication.

M2 Money Supply is a broad measure of money supply that includes M1 in addition to all time-related deposits, savings deposits, and non-institutional money-market funds.

Holdings may change daily. Holdings are reported as of the most recent quarter-end. The following securities mentioned in the article were held by one or more accounts managed by U.S. Global Investors as of (12/31/2019): Franco-Nevada Corp., Wheaton Precious Metals Corp., Royal Gold Inc.