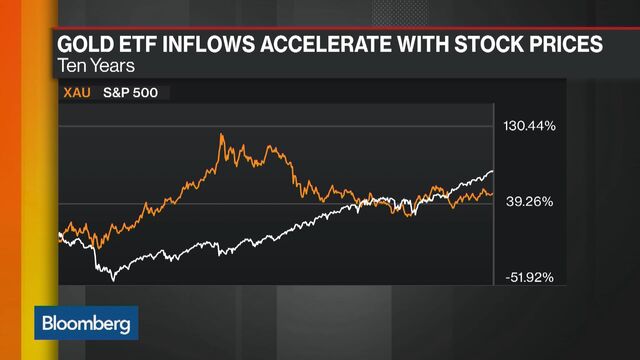 Flows Show Gold ETFs Are Riding the 'Wall of Worry'

On Friday, holdings in exchange-traded funds backed by bullion jumped to 71.9 million ounces, the highest since May 2013, according to the latest data compiled by Bloomberg. SPDR Gold Shares, the biggest gold-backed ETF, attracted the most money since September as the Trump-Russia probe escalated.

The U.S. political tumult "resulted in higher risk aversion among market participants for a time," Commerzbank AG analysts including Daniel Briesemann said in a note to investors.

By Monday, haven demand for gold had dissipated, sending gold prices lower as optimism that the tax cut would bolster corporate profits spurred gains in U.S. equities and the dollar .

Before it's here, it's on the Bloomberg Terminal.LEARN MOREHave a confidential news tip?
Get in touch with our reporters.Most Read Terms of Service Trademarks Privacy Policy 2017 Bloomberg L.P. All Rights Reserved Careers Made in NYC Advertise Ad Choices Website Feedback Help