Paris Climate Tango Not the Last

There is a lot going on in the world of energy this week. On Dec. 4 the Organization of Petroleum Exporting Countries meets, and as we saw following OPEC's late November meeting last year, any action it takes could affect oil prices for months. Right now it looks like the group is content to try to talk oil prices up without actually curtailing production.

But another big story is the Paris Climate Change Conference, which started this week and continues through the end of next week. This will be potentially the largest ever meeting on climate change. It is put on by the United Nations with the goal of producing a global agreement that will lead to a reduction in greenhouse gas emissions. Strategies that might help mitigate the potential effects of climate change are also on the agenda.

Aside from the environmental aspect, investors should care because policies arising from these sorts of meetings can have a big impact on money flows in the energy sector. This has been a big factor in my determined avoidance of coal stocks over the past few years, as I thought they were most vulnerable as countries sought to curb carbon emissions. Government policies also help explain the explosive growth of the wind and solar power sectors, but we need to be constantly aware that what the government gives it can just as quickly take away. More on that below.

The Paris conference is the biggest meeting on climate change since the 2009 United Nations Climate Change Conference, aka the Copenhagen Summit. That conference failed to produce a binding agreement for several reasons, the foremost of which is that nations tend to act in their perceived and narrowly defined self-interest. In climate talks, this often pits the heavily polluting developing countries against developed ones with better technology and lower risk tolerance. The result is that despite years of attempts to put an agreement in place, billions of dollars thrown at the problem and high profile campaigns to restrict carbon emissions, here is the reality: 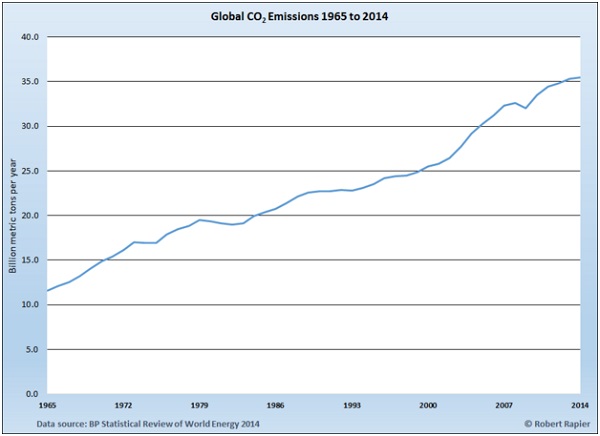 In 1992, the UN Conference on the Environment and Development was held in Rio de Janeiro. The meeting resulted in the Framework Convention on Climate Change, the goal of which was to "stabilize greenhouse gas concentrations in the atmosphere at a level that would prevent dangerous anthropogenic interference with the climate system." Since that 1992 meeting, global carbon dioxide emissions have risen by 55%.

In 1997 the Kyoto Protocol imposed legally binding obligations to reduce greenhouse gas emissions on developed countries. Following the Kyoto agreement, emissions in the world's developed countries (as defined by membership in the Organization for Economic Co-operation and Development) continued to rise for a decade. But higher oil prices helped to turn the tide in 2007. Rich-world emissions have been declining ever since, but are still 10% above 1992 levels (and 8% below the 2007 peak). 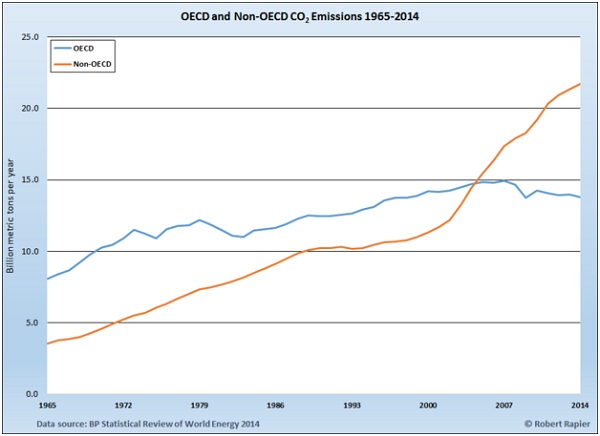 In order to halt the growth in global emissions, the carbon dioxide pollution by developing countries must be reined in. But developing countries argue that developed ones built their economies with the aid of cheap fossil fuels, so why shouldn't they be allowed to do the same? Further, the legacy emissions - that is the bulk of the current carbon dioxide content in the atmosphere - came from developed countries. Developing countries argue that they shouldn't now have to pay a disproportionate price for the mistakes of others in the past. This is where negotiations become tricky.

Despite the formidable challenges, and even if the Paris conference fails to come up with a binding agreement, governments will continue to spend money to limit and mitigate carbon dioxide emissions. This will continue to create investment opportunities in the renewable energy sector, and it can help guide us away from sectors that are likely to suffer in response (e.g., coal).

However, the renewable sector is rife with risks. In addition to the potential effects of volatile commodity prices (e.g., low oil prices making it difficult for renewable fuels to compete) there is the risk of shifting government policies. Something as common as a leadership or policy change can quickly reduce the subsidies for renewable energy and with them the potential for private profit.

The renewable energy graveyard is full of companies that failed once government pursestrings tightened. Last week shareholders of Spain's Abengoa (NASDAQ: ABGB) were reminded of this risk. For years, Spain had been one of the most generous dispensers of renewable energy subsidies. This helped Abengoa become one of the largest and most diversified renewable energy companies in the world.

But then Spain reformed its energy subsidies in 2014, and companies that had become too dependent on government largesse for revenue found themselves in financial trouble. This was a major factor behind the plummeting cash flow at Abengoa, which last week forced the company to seek bankruptcy protection. Abengoa shares fell 60% on the news, highlighting the unique risks faced by investors in renewable energy ventures.

Governments can buffet the renewables sector just like OPEC can roil the oil markets. They can take actions that can dramatically change the fortunes of companies within the sector. So it's important to pay attention to the summits like the one in Paris, to correctly predict the likely fallout and to act accordingly.

Be sure to join us at The Energy Strategist for guidance on how these meetings may impact your portfolio.