One of my favorite sources of energy visuals is the Energy Information Administration's (EIA) Flickr photo gallery. The graphics the EIA produces are incredibly informative, and today I want to share some that recently caught my eye and explain what they mean.

Here is a graphic the EIA shared just before Thanksgiving, also highlighted in the research agency's Today in Energy article: 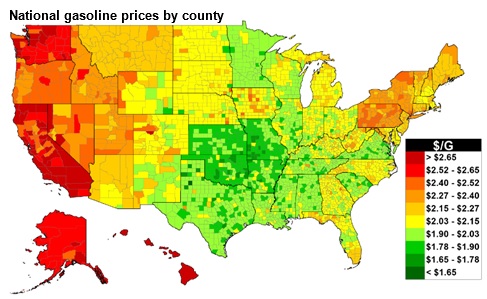 The article noted that gasoline prices this Thanksgiving were second-lowest of the past eight years for that holiday, though still up on a year earlier.

There are a couple of noteworthy observations here. The first is that gasoline prices are generally highest in the West. This is largely because California has extremely stringent environmental regulations for gasoline that limit shipments of cheaper gasoline from neighboring states. California is a gasoline market unto itself.

Second, the cheapest gasoline is in the Midcontinent and Gulf Coast regions. These areas have two things in common. They have seen a surge of oil production as a result of the shale drilling boom, and they have lots of refineries to process that oil.

Another EIA graphic shows that even though that surge of oil has tapered off and gone into reverse in some areas, Texas and North Dakota are still producing some 3 million more barrels of oil per day than in 2010. 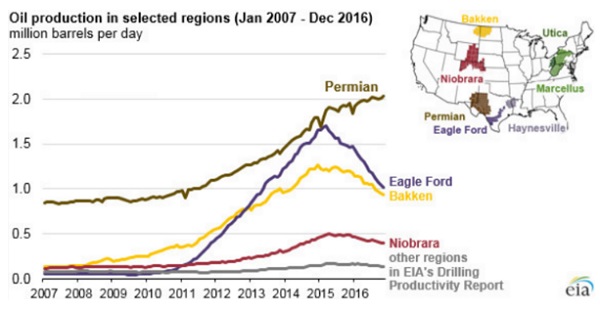 This graphic also identifies some of the most important oil-producing regions in the U.S., and shows that the Permian Basin has bucked the sharp downturn under way in the Bakken and Eagle Ford formations.

While the EIA presents many charts and maps dealing with oil production in the U.S., its graphics cover the entire energy sector. Here's one that really helps to understand why natural gas has overtaken coal this year as power plant fuel:

Note that it was cheaper to produce a megawatt-hour of power (the graph on the right) from natural gas for most of the first half of 2016, which encouraged power plants that could switch from coal to natural gas to do so. However, those plants can also switch back, and if the projections (the dotted line in the graph) are accurate, that may be exactly what happens in 2017. Over the longer term, I still think coal is in a terminal decline, but the chart shows why it may bounce back in the short term.

These graphics are highly informative, but they won't tell you which energy stocks belong in your portfolio. For that, please join us at The Energy Strategist and MLP Profits.