Silver is Like Gold on Steroids / Commodities / Gold & Silver 2020

Peter Krauth explains why he believes investors should hold a position in silver.

We're still in the early innings of a precious metals bull market.

And if you're wondering whether you need to own some silver, my answer is categorically yes.

It's only a matter of degree.

With silver that's important because it acts like gold, but on steroids.

Silver can languish for extended periods, even if gold moves. But then it tends to play a rapid game of catch-up.

Timing such moves is difficult at best. Instead, it's better to build a silver position on price weakness, then simply sit patiently.

Because as I'll show you, the payoff tends to be very rewarding. 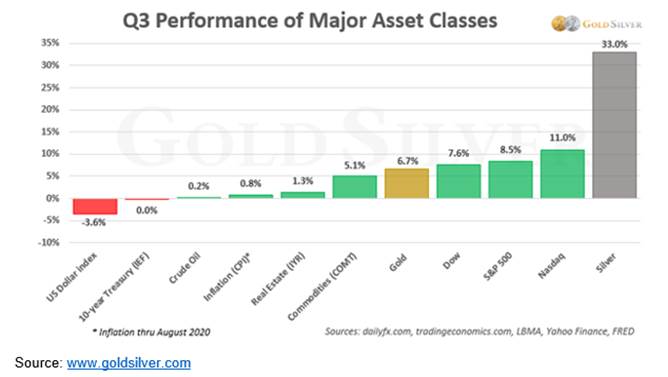 By all accounts, silver's being driven by its monetary metal characteristics. The jury is out on whether gold or silver was first to be used as a currency, but we do know that they were used going back at least 5,000 years.

Fans of both metals should be happy, since the oldest known coin is the Lydian trite from around 600 BC. It was made of electrum, which is a gold and silver alloy. Still, silver was the most commonly used metal in daily transactions until the 20th century.

More recently, demand for silver has exploded. The Silver Institute breaks down demand into five main categories: industrial, photography, jewelry, silverware and physical investment. 2019 saw smallish decreases in four of these categories over 2018. However, within the industrial sector, photovoltaics (solar panels) enjoyed a 6.7% increase.

The standout, however, is net physical demand, where 2019 saw an impressive 12.3% increase over 2018. In my view, given the large price gain this year, that trend will persist.

One telling indicator of the "stickiness" of silver ETF buying is the action of Robinhood account holders. 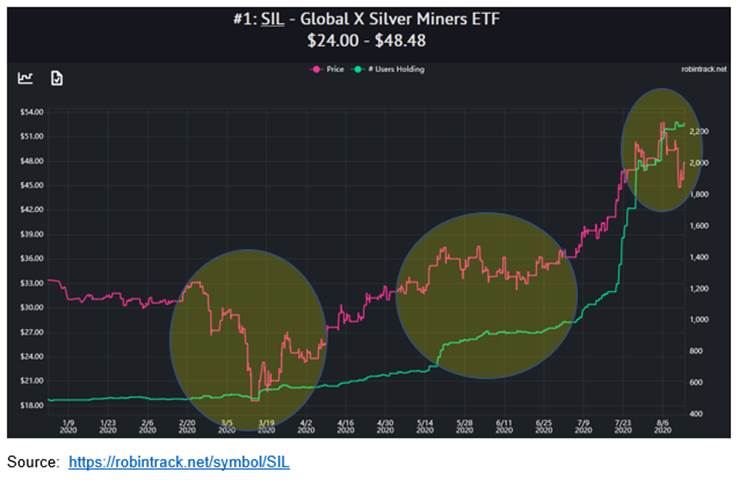 There were four bouts of weakness since the February/March selloff in silver stocks as represented by the SIL ETF. The number of holders of SIL dropped in a small but notable way in March, but then barely weakened after that, even when the price of SIL retreated.

Most impressive is the early August action, when SIL dropped from $52 to $44, yet the number of users holding SIL actually continued to rise.

If we look at the recent price action of silver, we see some renewed strength. 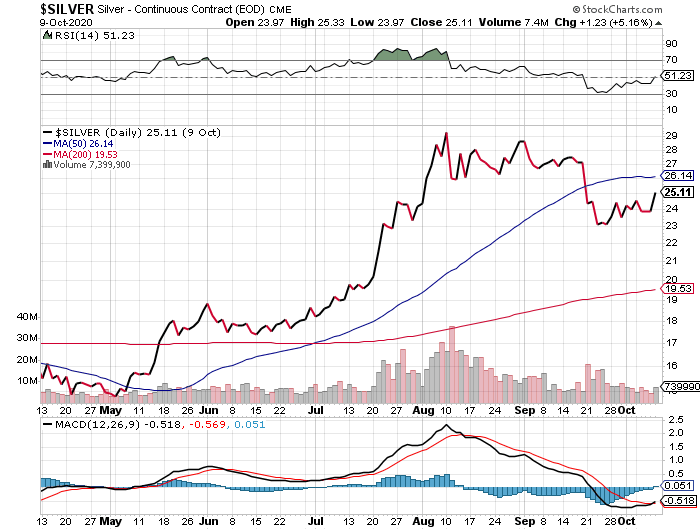 Both the RSI and MACD momentum indicators have been trending upwards. But "smart money" silver hedgers are still short just over 56,000 contracts, not suggesting bullish sentiment right now.

If silver manages to rise from here, I'd watch for it to possibly "test" resistance near its 50-day moving average around $26. If it reverses from there then we're likely looking at more weakness/consolidation before rallying.

The silver stocks to silver ratio has been rising slightly since early August. 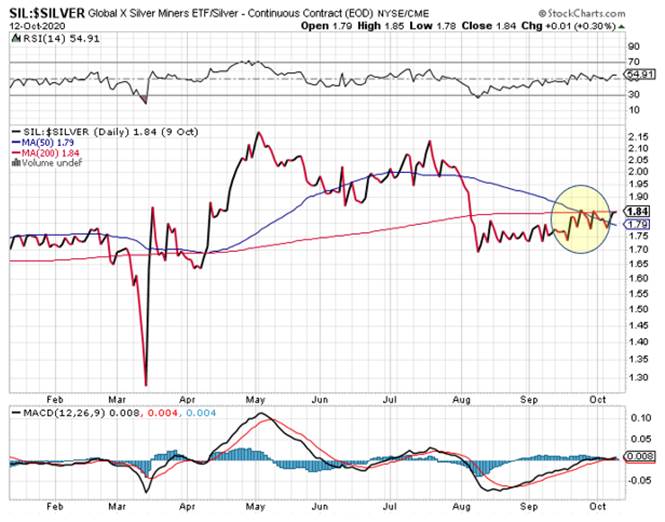 In my view, silver could require more selling to rebalance sentiment. If that happens, then of course I'd expect silver stocks to magnify such a drop.

Still, I expect any near-term weakness to remain short-lived. All the fundamental and technical drivers are in place to push gold and silver much higher in the months and years ahead.

As the next chart of SLV versus GLD shows, silver is up 108% against gold's 29% since their March bottom. That's nearly four times the return.

I think we could see silver take out its August $30 high, and possibly test the $37 level before year's end.

So, if you're concerned about silver's volatility, then just allocate a smaller slice of your portfolio while maintaining some exposure.

Remember, when silver gets going, it's like gold on steroids.

Peter Krauth is a former portfolio adviser and a 20-year veteran of the resource market, with special expertise in energy, metals and mining stocks. He has been editor of a widely circulated resource newsletter, and contributed numerous articles to Kitco.com, BNN Bloomberg and the Financial Post. Krauth holds a Master of Business Administration from McGill University and is headquartered in resource-rich Canada.