Gold Price Formed a Bearish Star, and It's Not Even Christmas Yet / Commodities / Gold and Silver 2022

The implications are just as you thinkthey are. After a sharp run-up, the rally has run its course, and the yellowmetal is now about to slide again.

Thecorrective upswing was quite sizable and sharp. It was bigger than what we sawin July and August 2022, and this time, gold needed just two weeks to rally,instead of four.

Backin mid-2022, it then took gold three weeks to decline to more or less where thecorrective rally started. So, yes, gold fell a bit faster than it had climbed.

Historyrhymes, so this time, the decline could be sharper than the rally as well. Andsince the rally took just two weeks… Itlooks like the next week or two might be very interesting for goldinvestors/traders. And bearish.

Actually,the next ~1.5 weeks because this week’s trading will be limited due toThanksgiving.

Youmight be wondering, why I forecasted that the gold price would be about to “slide”,instead of just moving lower in a more or less regular manner.

Theanalogy to what gold did in 2013 is one of the major reasons. 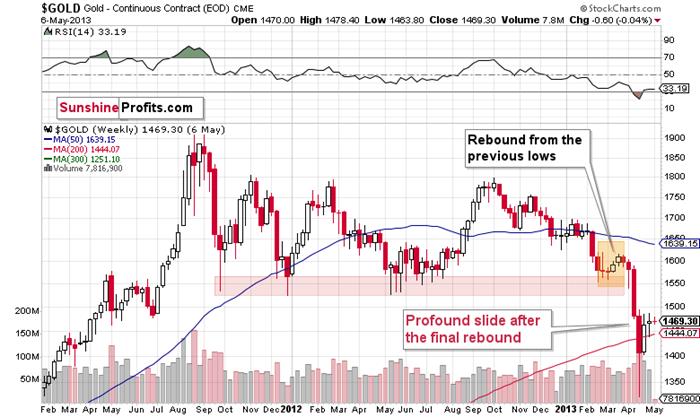 Thefirst thing that you can notice on the above chart is that it looks just likethe previous one, even though they are almost a decade apart. And that’s true.

Howis that even possible, given different economic and geopolitical realities?It’s possible because the key drivers behind decisions to buy and sell remainthe same: fear and greed. Those don’t change, people tend to react similarly tosimilar price/volume patterns.

Ofcourse, each situation is specific, which is why history doesn’t repeat itselfto the letter, but it does tend to rhyme.

Whenyou compare the situations that I marked with orange on both charts, you’llrealize that we’re currently likely in a situation where gold is just beforeits major slide.

Consequently,last week’s “shooting star” candlestick is not “just” a reversal pattern. It’s a reversal pattern that likely marksthe beginning of a new stage of the bigger self-similar pattern. A stage thatis characterized by a dramatic downswing.

Therewere many other confirmations of the bearish case, but the above-mentioned link(and the one to 2008) are the most important ones, in my view. One of theremaining indications came from the silver market. 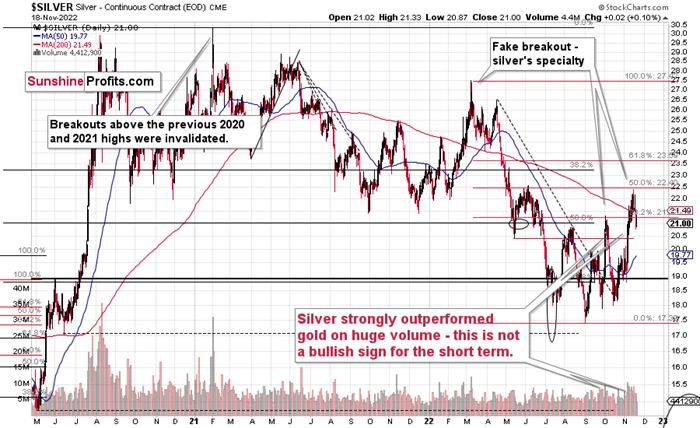 The white metal moved a lot during this recent upswing, and while most markets (stock prices, the USD Index, mining stocks) corrected ~38.2% of the precedingmoves (that’s one of the classic Fibonacci retracements), silver correctedabout 50% of the preceding decline.

This might appear bullish, but it’s not. Silver’s short-termoutperformance of gold has proven to be a bearish indication over and overagain. Consequently, forecasting higher silver prices based on the fact thatit has just rallied significantly (and that it outperformed gold) is usually abad idea.

Have We Reached the Top?

Before summarizing, I would like torecall two recent situations (one more recent than the other). Earlier thismonth, I received quite a few questions about the increase in the officialsector’s purchases of gold – whether it was bullish. I replied that it was notbullish because the governments and monetary authorities tend to be the worstinvestors. They tend to buy close to the top, and they tend to sell close tothe bottom.

I used theBrown Bottom as an example - the huge sale of gold reverses over 20years ago that marked to bottom of gold prices and launched a multi-year bullmarket).

Interestingly, we recently saw aconfirmation of this tendency – from a different market, but still. Namely, thePresident of El Salvador decided to make Bitcoin the country’s legal tender.That happened just a few months before Bitcoin formed its all-time high – fromwhich it fell by over 70%.

Now, while I don’t think that gold madean all-time high recently, taking the two together makes it even more likelythat gold is not about to rally in the medium term, but decline. The long-term outlook for gold remains verybullish – in my view, we just need to wait for it a bit longer (in terms ofmonths).

Thank you for reading our free analysistoday. Please note that the above is just a small fraction of today’sall-encompassing Gold & Silver Trading Alert. The latter includes multiplepremium details such as the targets for gold and mining stocks that could be reached in the next few weeks. If you’dlike to read those premium details, we have good news for you. As soon as yousign up for our free gold newsletter, you’ll get a free 7-day no-obligationtrial access to our premium Gold & Silver Trading Alerts. It’s really free– sign up today.

SunshineProfits enables anyone to forecast market changes with a level of accuracy thatwas once only available to closed-door institutions. It provides free trialaccess to its best investment tools (including lists of best gold stocks and best silver stocks),proprietary gold & silver indicators, buy & sell signals, weekly newsletter, and more. Seeing is believing.

All essays, research and information found aboverepresent analyses and opinions of Przemyslaw Radomski, CFA and SunshineProfits' associates only. As such, it may prove wrong and be a subject tochange without notice. Opinions and analyses were based on data available toauthors of respective essays at the time of writing. Although the informationprovided above is based on careful research and sources that are believed to beaccurate, Przemyslaw Radomski, CFA and his associates do not guarantee theaccuracy or thoroughness of the data or information reported. The opinionspublished above are neither an offer nor a recommendation to purchase or sell anysecurities. Mr. Radomski is not a Registered Securities Advisor. By readingPrzemyslaw Radomski's, CFA reports you fully agree that he will not be heldresponsible or liable for any decisions you make regarding any informationprovided in these reports. Investing, trading and speculation in any financialmarkets may involve high risk of loss. Przemyslaw Radomski, CFA, SunshineProfits' employees and affiliates as well as members of their families may havea short or long position in any securities, including those mentioned in any ofthe reports or essays, and may make additional purchases and/or sales of thosesecurities without notice.