How Repeal Of The Clean Power Plan Impacts Investors

This week, as expected, Donald Trump signed an executive order that instructed EPA Administrator Scott Pruitt to begin the process of dismantling the Clean Power Plan (CPP). The CPP was first proposed by the Obama administration in 2014 and would have required states to cut carbon dioxide emissions from existing coal- and gas-fired power plants, targeting an emissions reduction of 30% below 2005 levels by 2030.

Repeal of the CPP will have an impact on the future of the power sector. As an investor, you should be aware of this impact. We can get an idea about future electricity generation, with and without the CPP, from the U.S. Energy Information Administration (EIA) in its 2016 Annual Energy Outlook.

The EIA noted the CPP "imposes additional costs on higher-emitting energy sources," and would lead to a projected 92 gigawatts of coal-fired capacity to be retired by 2030. Without the CPP, 60 GW of coal would still be retired, but net generation would be relatively flat as some existing plants increase output:

Of course, there are still state laws aimed at promoting clean energy, and many utilities have already moved in that direction. Retirements of coal-fired power plants have accelerated in recent years, spurred on both by cheap natural gas, and by the passage of the EPA's Mercury and Air Toxics Standards (MATS) that went into effect in 2015.

As a result, the EIA reported that nearly 18 gigawatts (GW) of electric generating capacity was retired in 2015, and more than 80% of the retired capacity was conventional steam coal: 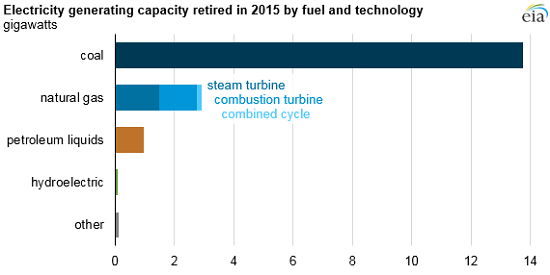 Coal is going to continue to lose market share regardless. But, before Donald Trump's election, expectations were that the CPP would accelerate the transition from coal to natural gas and renewables. The impact of his election win and subsequent repeal of the CPP will be to slow that transition. But it won't bring back the coal industry.

Because expectations of a quick demise for the coal industry were priced into the share price of coal companies, some are going to bounce. That, in fact, happened to some of the coal companies in the portfolios of The Energy Strategist. Interestingly enough, our renewable holdings have not been hit as one might expect given the expectation of slower growth in the sector. In fact, one of our solar company holdings is up 11% over the past week, and 25% year-to-date.

If you are holding coal companies for income, that income stream just got extended. But beware of buying coal for growth. I just don't foresee that coming back. And don't fret too much about the impact on natural gas and renewables. The future there is still bright.