Regular readers may know that I have been bearish on the long-term outlook of coal for several years. As a general rule, we have steered investors away from the sector. But that general rule isn't a steadfast rule, because there are times that the coal sector will be oversold.

That was the case in the first half of 2016 as we added several coal stocks to The Energy Strategist portfolios near the lows and then rode them to huge gains for the remainder of the year. In October we recommended three more coal producers. We weren't counting on Donald Trump's upset win in the presidential election, but didn't mind the double-digit gains this trio scored the next day.

Some power producers have the option to use either coal or natural gas to generate power. The following graphic from the EIA illustrates the recent trend in the relative prices of these competing fuels: 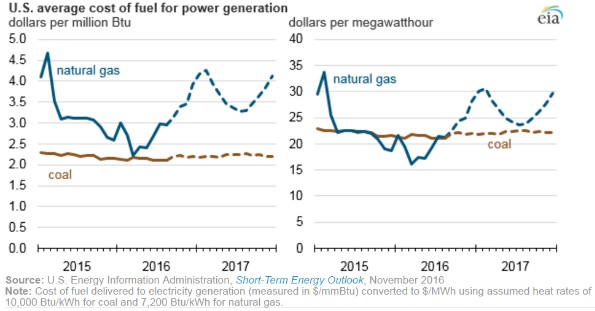 Mind the footnote indicating that the heat rate of natural gas is lower than that of coal. That means that natural gas will generate more power than coal with the same energy content. In other words, natural gas is a more efficient power plant fuel.

The graphic shows that in 2015, when natural gas cost about $3.10 per million British thermal units (MMBtu) and coal was about $2.25/MMBtu, natural gas was as profitable to burn as coal with the same thermal content. Note that (not coincidentally), this ratio of $2.25 to $3.10 is the same as the ratio of the heat rate required to produce 1 kilowatt hour (kWh) of power via natural gas or coal (7,200/10,000).

In other words, we can calculate that when the price of coal is above 72% of the price of natural gas per MMBtu, utilities will favor natural gas (all other factors being equal; more on that below).

That was the case for the first half of 2016, and that helped natural gas overtake coal in power production on an annual basis for the first time ever: 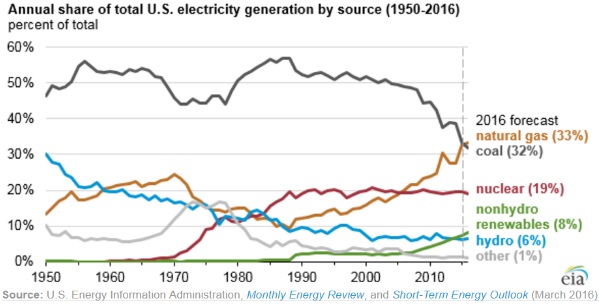 As natural gas prices rise above $3/MMBtu (assuming current coal prices), utilities have dwindling economic incentive to burn natural gas rather than coal. But the shale gas boom over the past decade has driven natural gas prices below $3/MMBtu fairly regularly in recent years. That helps explain why natural gas has rapidly displaced coal in power production.

In reality, coal needs to be even cheaper to be competitive, because all things are not equal. Environmental regulations are the wild card. Absent such rules, coal at less than 72% of the price of natural gas per unit of heat content becomes competitive. In fact, the threshold price at which coal becomes the cheaper option is even lower as a result of environmental regulations, many at the state level, aimed at limiting pollution and global warming.

Federal environmental regulations on coal will be one target of the incoming Trump Administration. A relaxation of those rules would nudge coal's ceiling closer to that 72% breakeven point against natural gas.

There are a few more complicating factors beyond fuel efficiency and environmental regulations. Capital construction costs, fuel delivery costs and long-term fuel supply contracts that may limit a utility's ability to shift back and forth.

The long-term shift toward natural gas will likely continue, but in recent months coal has traded at only about 60% of the cost of natural gas on an energy equivalent basis. That is a price point that has historically led to a short-term shift back to coal, and this time is no different. Hopefully now you have a bit more insight into the reasons.

Join us at The Energy Strategist for profitable investment advice capitalizing on this trend.