With a proven management team and an enviable prospect in the heart of Canada's Golden Triangle, investors have been excited about Aben Resources for some time, and last year's drilling yielded promising results for the junior gold explorer. Now, CEO Jim Pettit says the company is planning a much wider exploration programme - extending to the Yukon as well as BC - all without the need for further funding.

Aben's hottest prospect is the Forest Kerr Project, a long string of three claim groups stretching for 50km up the Kerr fault in British Columbia, which has proved to be a rich seam for gold miners big and small. With more than 100 years of combined experience, Aben's management picked these claims not just for their proximity to the fault itself, but also to the Stuhanian-Hazelton Contact zone. Jim believes that those two rock assemblages are “absolutely necessary for discovery” in the Golden Triangle. The first drill hole of 2018 discovered multiple high-grade zones, with readings as high as 62.4 g/t gold over 6 metres.

Jim believes that was just the start, because in the 2018 season, Aben was hamstrung by having only a small number of pad site permits. This year, the possible drill sites have been ramped up from 9 to 40, giving the company’s geologists far more flexibility to explore the possibilities in depth when initial holes yield something of interest.

"We'll have more men in the field because this year we have more drill pad locations, which means we have more flexibility as to where we drill this year as opposed to last year, he told Canadian Mining Report.

"We now have 40 locations we can utilize, and 40 pads. That's over the next two years -Gold, we'd never use that in one year! But it gives us the flexibility to go and do things at better angles."

He suggests that flexibility, and ability to drill at angles from a number of pads in a single area, may help Aben firm up the discoveries last year's results suggest are close. The company will be working with 3D renditions of all the previous work carried out in the area - around 45 holes in total. It aims to start this year's drilling in three areas that each returned good results previously. These will be carried out in short order and further areas can then be explored.

Among the most promising prospects will be the historic Noranda Hole, which is likely to be one of the drillers' first ports of call. The company was unable to conduct further tests at Noranda last year because of its restricted pad locations, which was a shame because a "spearfishing" attempt in 2017 had missed the old Noranda results that had yielded over 350g of gold in one meter.

"We'll get back in there, and we'll do that we did in the north boundary zone at the beginning of the second year: we went underneath the whole thing, and it was spectacular," Jim said. "So we're going to do something like that at the old Noranda Hole, and get up close and drill underneath it"

Jim has described the Forest Kerr claims as "geologically perfect".

"In terms of being close to this major contact that you need, every discovery has been within two kilometers of that contact, and been associated with a major structural feature – we've got that, that's the Kerr Fault," he said.

Canada's Golden Triangle is very much in fashion, especially since the successes of major gold miner, Pretium, in the area. Peter Epstein recently wrote on Streetwise Reports:

"The Golden Triangle is a tremendous place to explore and make precious and base metal discoveries. It's known for monster high-grade gold deposits, but also hosts silver, copper and other base metals."

Improved infrastructure and even glacial retreat is making this once inhospitable area increasingly accessible to modern drilling techniques. Even amongst a host of new claims and companies in the region, Epstein chose Aben as his top pick among the junior gold miners, praising its "early stage," "blue-sky potential", and good funding.

He said: "One of the best things Aben Resources has going for it is its substantial cash liquidity. Comparing Aben's cash balance with that of [its Golden triangle Peers], it has the strongest cash liquidity relative to market cap. Aben is funded for its next Golden Triangl drill campaign. At c$220/meter in 2019, a bit below 2018's all-in costa, it could do potentially 18,000 m (60-70 holes) for a total cost of c$4 million. That's serious amount of drilling, more than in 2017 and 2018 combined."

In fact, Jim says the company has 5,000m as a minimum target, but will "bump it up if we hit anything". At the year end, the company was still sitting on C$5.5m in cash, and had already has significant acreages still to explore in British Columbia and beyond.

Jim said: "I hope we get off to a good start like last year. But while we're [drilling], we're going to have guys in the field, beacause the whole southern extent of the boundary zone is wide open and we never got there last year. We did a fair amount of field work, but limited to the amount of personnel. And then rock sampling and soil sampling and till sampling. So we're going to have more guys on the ground while we're drilling, and then we can start coming up with drill locations for the second half of the season." At the same time, Aben will also be firming up its knowledge of its Yukon prospect - called Justin - with plans to spend between $1m and $1.3m this year. That is a major escalation from the $150,000 to $200,000 spent in previous seasons on Justin, and the company hasn't drilled in Yukon since 2012.

Aben, holds a 100% interest in the 18,314 acre Justin Property. The property is located in southeast Yukon on the Tintina Gold Belt, to the immediate southeast of Golden Predator’s 3 Aces Project.

Jim explains: "We hit an intrusion related gold system, which is typical of the Tintina Belt that runs from Alaska across the Yukon. And that's just where you have an intrusion that comes up, a younger-age rock, and it pushes everything out and creates fracturing, and you get lots of fluids in it. But generally, what you get in a system like that is large tonnage, lower grade. What we've hit this past two years by soil sampling, we caught on to something that looks an awful lot like Golden Predator's 3 Aces project, where it's a vein system. We definitely think it's orogenic, so it's intense veining and high grade."

Aben has pulled out 1,200 gold grains from a 4kg sample at Yukon, and Jim is convinced that they have not been displaced by glaciers. "They're almost all pristine, which means they weren't mobilized. We’re sitting on top of something - it's all right there within meters,” he said. In all likelihood, he expects Aben’s claim to be part of the same system as 3 Aces, only closer to the surface.

"The whole system, all the 3 Aces, everything, could have been created by the intrusion that's under our property, and we got it exposed at surface," he said.

This year, Aben is hiring a track-mounted rotary air blast (RAB) drill, which will be able to sink many test holes across the most promising terrain. Work in the Yukon can actually start sooner than in the Golden Triangle, as mining roads make it relatively accessible. Jim is also enthusiastic about the value for money aspect of Yukon drilling.

This extended activity bodes well for the liquidity of Aben's stock, which, like all junior miners operating primarily in the mountains and the far north, has a tendency to suffer from an extended winter low season when no news is forthcoming.

"We'll probably add a month or two to our season instead of just having a quick four-month period where the stock takes off and then the stock collapses," Jim said.

He also expects gold stocks involved in the now very busy Golden Triangle to be supported by each others' news, which will help maintain interest in the area.

With most analysts predicting a firm, if not necessarily rising, gold price for 2019, and many investment experts pointing to experienced management teams as the key to investing in junior mining stocks, Aben Resources has got itself on the radar: it is one of the Golden Triangle plays backed by sector legend Eric Sprott, for example. With more news flow from Aben itself and its peers with nearby prospects expected from a busy 2019, the stock looks set to continue generating interest in the months ahead. 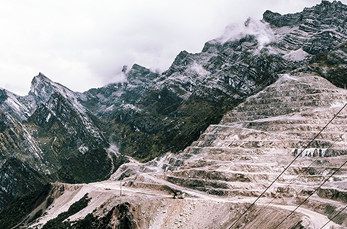