While investors remain happy-go-lucky,fundamental data for gold and silver is now worse than in 2021. Is this thelast chance to come back to earth?

As another week comes to a close, thewinds of change are blowing across the financial markets. However, while manyinvestors and analysts can see only sunny days ahead, fundamental storm cloudsshould rain on their parade over the medium term, and it’s quite possible thatit’s going to happen shortly.

To explain, this week culminated with theUSD Index soaring above 100, the U.S. 10-Year realyield hitting a new 2022 high, and Goldman Sachs’ FinancialConditions Index (FCI) hitting its highest level since the global financialcrisis (GFC). However, the PMs paid no mind yet. In fact, investors across many asset classes continue toignore the implications of these developments. So far.


With sentiment poised to shift when theeconomic scars begin to show, the “this time is different” crowd may regret notheeding the early warning signs. For example, the Bank of Canada (BoC) announced a 50 basis point ratehike on Apr. 13., andwith the Fed likely to follow suit in May, the domestic fundamental environmentconfronting the PMs couldn’t be more bearish.

Moreover, BoC Governor Tiff Macklem(Canada's Jerome Powell) said: "We are committed to using our policyinterest rate to return inflation to target and will do so forcefully if needed."

Furthermore, while he added that the BoCcould "pause our tightening" if inflation subsides, he cautioned that"we may need to take rates modestly above neutral for a period to bringdemand and supply back into balance and inflation back to target."

However, with the latter much more likelythan the former, the BoC's decision islikely a preview of what the Fed should deliver in the months ahead.

Tothat point, while investors continue to drown out officials’ hawkish cries, Iwarned on Apr. 13 that the Fed knows full well about the difficulty of the taskahead. I wrote:

Fed Governor Lael Brainardsaid on Apr. 12: “Inflationis too high, and getting inflation down is going to beour most important task.”

Sheadded: “I think there’s quite a bit of capacity for labor demand to moderateamong businesses by actually reducing job openings without necessitating highlevels of layoffs.” As a result, she’s telling you that Fed officials will makeit their mission to slow down the U.S. economy.

Withphrases like “capacity for labor demand to moderate” and “reducing jobopenings” code for whathas to happen to calm wage inflation, the prospect of a dovish 180 is slim tonone. As such, this is bullish for real yields and bearish for the PMs.

Moreimportantly, notice her use of that all-important buzzword?

Moreover,where do you think she got it?

Echoing that sentiment, Chicago FedPresident Charles Evans (a relative dove) said on Apr. 11 that more than one 50basis point rate hike could be on the horizon. "Fifty is obviously worthyof consideration; perhaps it's highly likely even if you want to getto neutral by December."

As a result, with the USD Index and theU.S. 10-Year real yield already soaring, what do you think will happen if theFed pushes the U.S.federal funds rate "to neutral by December?"

Even more hawkish, Fed Governor Christopher Waller said on Apr. 13: “I think we’re going to deal withinflation. We’ve laid out our plans. We’re in a position where theeconomy’s strong, so this is a good time to do aggressive actions because the economycan take it.”

He added: “I think we want to get above neutral certainly by the latter half ofthe year, and we need to get closer to neutral as soon as possible.”

Now, ifwe presented these quotes to the permabulls, they would say: "So what? We already know that the Fedis going to raise interest rates."

However, while a higher U.S. federalfunds rate is now the worst-kept secret, the impact on U.S. economic growth is far from priced in. Withinvestors assuming the Fed will normalize inflation without hurting the U.S.economy, they are positioned for an unrealistic outcome. Stagflation,anyone?

Moreover, with the goldand silverprices ignoring everything the Fed throws at them, they'reattempting to re-write the history books.

However, with Brainard andWaller telling you that their goal is to create a bullish environment for theUSD Index and the U.S. 10-Year real yield, the PMs have fought this battlebefore and lost this battle before.

Pleaseremember that the Fed needs to slowthe U.S. economy to calm inflation, and rising asset prices are mutuallyexclusive to this goal. Therefore, officials should keep hammering thefinancial markets until investors finally get the message.

Moreover,with the Fed in inflation-fighting mode and reformed doves warning that theU.S. economy “could teeter” as the drama unfolds, the reality is that there isno easy solution to the Fed’s problem. To calm inflation, it has to killdemand. As that occurs, investors should suffer a severe crisis of confidence.

Likewise, Waller was even more realisticwhen he spoke on Apr. 11: He said:

“Withhousing, can we cool off demand for housing without tanking the constructionindustry? Can we cool down the labor demand without causing employment to fall?That’s the tricky road that we’re on.”

As a result, while Fed officials understandhow difficult it will be to normalize inflation, investors remain in la-laland. However, when the “collateral damage” eventually unfolds, the shift insentiment should result in the profoundre-pricing of several financial assets.
Please see below:

Source: Bloomberg
Thus, investors’ uninformed state of denial will likely seem obvious in themonths ahead. (Yes, I know, it’sdifficult to remain rational while surrounded what’s irrational, and that’s thevery thing that makes investing “simple, but not easy”). Moreover, whileMacklem cautioned that the BoC could “pause our tightening” if inflationsubsides, the same rule applies to the Fed. However, with inflation stillraging, the Fed and the BoC are unlikely to change their hawkish tones anytimesoon.
Case in point. The U.S. Bureau of LaborStatistics (BLS) released the Producer Price Index (PPI) on Apr. 13.,and withoutperformance across the board, green lights were present for all of the wrongreasons. For context, the gray figures in the middle column were economists’consensus estimates.
Please see below:

Source: Investing.com
Likewise, the NFIB released its SmallBusiness Optimism Index on Apr. 12. The report revealed:
“The NFIB Small Business Optimism Indexdecreased in March by 2.4 points to 93.2, the third consecutive month below the48-year average of 98. Thirty-one percent of owners reported that inflation was the single most importantproblem in their business, up five points from February and the highest readingsince the first quarter of 1981. Inflation has now replaced ‘labor quality’ asthe number one problem.”
How about this divergence?
“Owners expecting better businessconditions over the next six months decreased 14 points to a net negative 49%, the lowest level recorded in the48-year-old survey.”
“The net percent of owners raisingaverage selling prices increased four points to a net 72% (seasonallyadjusted), the highest reading recordedin the series.”
Moreover, “a net 50 percent plan price hikes (up 4 points).”
Please see below: 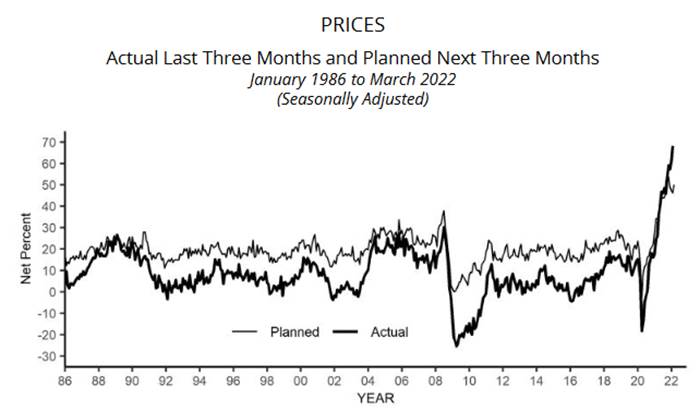 Source: NFIB
On top of that, “a net 49 percentreported raising compensation, down 1 point from January’s 48-year record highreading. A net 28 percent plan to raisecompensation in the next three months, up 2 points from February.”
Please see below: 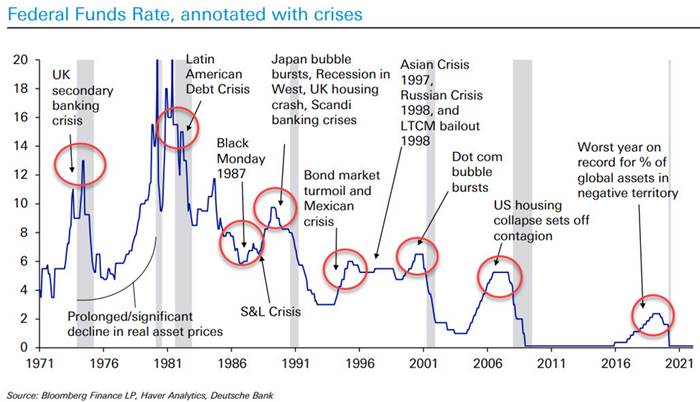 The bottom line? Investors lack theforesight to see how the Fed’s rate hike cycle will likely unfold. Moreover,with Fed officials warning of the “collateral damage” that occurs when theycurb demand to reduce inflation, the permabulls have simply closed their eyesand covered their ears. However, when sentiment is built on a foundation ofsand, it often collapses when reality re-emerges.
In conclusion, the PMs rallied on Apr 13as momentum remains the name of the game. However, while sentiment remainsrobust, gold, silver, and mining stocks’ fundamentals are worse now than at anypoint in 2021. As a result, history shows that not only are the current pricesunsustainable, but profound drawdowns are required for the PMs to reflect theirintrusive values.

What to Watch for Next Week

With more U.S. economic data to bereleased next week, the most important ones are as follows:

With the regional data providing earlyinsight into April’s inflation dynamics, continued price increases will putmore pressure on the FOMC.

Unlike the Philadelphia Fed’s index,S&P Global’s data covers the entire U.S. As a result, the performance ofgrowth, employment, and inflation will be of immense importance.
All in all, economic data releases impact the PMs because they impact monetarypolicy. Moreover, if we continue to see higher employment andinflation, the Fed should keep its foot on the hawkish accelerator. And if thatoccurs, the outcome is profoundly bearish for the PMs.

Thank you for reading our free analysistoday. Please note that the above is just a small fraction of today’sall-encompassing Gold & Silver Trading Alert. The latter includes multiplepremium details such as the targets for gold and mining stocks that could be reached in the next few weeks. If you’dlike to read those premium details, we have good news for you. As soon as yousign up for our free gold newsletter, you’ll get a free 7-day no-obligationtrial access to our premium Gold & Silver Trading Alerts. It’s really free– sign up today.

SunshineProfits enables anyone to forecast market changes with a level of accuracy thatwas once only available to closed-door institutions. It provides free trialaccess to its best investment tools (including lists of best gold stocks and best silver stocks),proprietary gold & silver indicators, buy & sell signals, weekly newsletter, and more. Seeing is believing.

All essays, research and information found aboverepresent analyses and opinions of Przemyslaw Radomski, CFA and SunshineProfits' associates only. As such, it may prove wrong and be a subject tochange without notice. Opinions and analyses were based on data available toauthors of respective essays at the time of writing. Although the informationprovided above is based on careful research and sources that are believed to beaccurate, Przemyslaw Radomski, CFA and his associates do not guarantee theaccuracy or thoroughness of the data or information reported. The opinionspublished above are neither an offer nor a recommendation to purchase or sell anysecurities. Mr. Radomski is not a Registered Securities Advisor. By readingPrzemyslaw Radomski's, CFA reports you fully agree that he will not be heldresponsible or liable for any decisions you make regarding any informationprovided in these reports. Investing, trading and speculation in any financialmarkets may involve high risk of loss. Przemyslaw Radomski, CFA, SunshineProfits' employees and affiliates as well as members of their families may havea short or long position in any securities, including those mentioned in any ofthe reports or essays, and may make additional purchases and/or sales of thosesecurities without notice.