The end of the year is always a busy time. In the next few weeks I plan to write articles covering the top energy stories of the year, highlight the top-performing energy companies of the year, grade my predictions for 2016 and make new ones for 2017.

Today, given that President Obama only has a few weeks left in office, I want to review the evolution of the energy sector during his eight years in the White House.

Obama has been called one of the most anti-energy presidents the country has ever seen. As if to put an exclamation point on this perception, last week his administration intervened to block an easement for the nearly completed $3.8 billion Dakota Access Pipeline (DAPL). It did so despite the fact that the U.S. Army Corp of Engineers had previously issued a permit for the Missouri River crossing, and even though multiple pipelines already cross the river.

It was a similar story with the Keystone XL. That pipeline would have been no different from the other 75 oil and gas pipelines that cross the U.S./Canadian border, but it caught the attention of protesters who ultimately succeeded in getting the Obama Administration to deny the pipeline project (after delaying the decision for years). It was a decision rooted in politics rather than sound energy policy.

The Obama Administration has also banned offshore drilling in the Arctic, and placed additional rules and regulations on the fossil fuel industries - particularly on coal. Clearly, there is plenty of substance to claims that Obama has been a foe of fossil fuels.

So let's take a look at what has happened to energy production during his two terms in office. Let me first make clear that presidential policies typically take years to impact production. In other words, the administration preceding Obama's is partly responsible for changes in domestic energy production on his watch, just like Obama's impact will be felt well beyond Jan. 20.

Which brings us to coal. In 2008 a record 1.06 billion metric tons of coal was produced in the U.S. during President George W. Bush's last year in office. Coal production exceeded a billion metric tons in five of the eight years of the Bush presidency.

The coal industry and its allies blame this decline on Obama's policies, but there is another major factor at work here. Ironically given Obama's antipathy to fossil fuels, fossil fuel production rose to its highest ever levels during his time in office.

The surge in oil production began a couple of years later than the uptick in natural gas production. In fact, it coincided with President Obama's first year in office. Following eight straight years of decline during the Bush Administration, oil production rose annually for the first seven years of the Obama Administration. From 5 million barrels per day (bpd) in 2008, U.S. crude oil output increased 88% to 9.4 million bpd in 2015. In fact, oil production has never risen faster in the 150-year history of the U.S. oil industry: 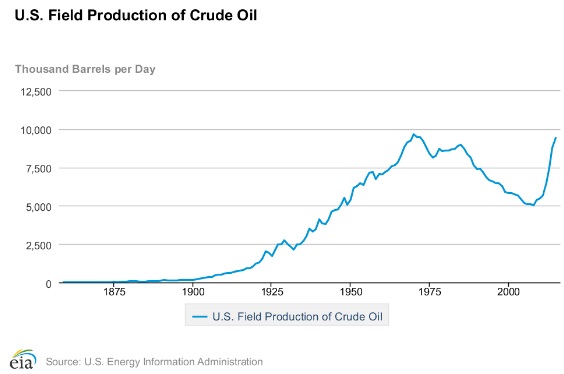 To be clear, the Obama Administration doesn't deserve the credit for this surge. In fact, many of the factors that led to this upswing, such as advances in hydraulic fracturing and horizontal drilling, were operating before Obama assumed office.

As with natural gas production, domestic oil production is set to fall this year. Those declines are the result of low prices that have plagued the industry. High prices drove technological improvements that enabled the shale revolution, and low prices are the primary reason production dropped in 2016. Thus, while restrictive Obama policies may have had some marginal impact on oil and gas production, the biggest driver as always is price.

As for the steep decline in coal production, that is one of the consequences of the abundance of cheap natural gas. The downturn in coal has also been exacerbated by regulations (at the federal and state levels) that have encouraged the use of lower carbon power options.

Nuclear power output was relatively stable during Obama's presidency, but renewables surged across the board. Again, in some cases this was a result of longstanding policies.

For example, biofuel production rose in all but one of the Obama years, but the seeds of those gains were sown during the last decade. The Renewable Fuel Standard mandating increasing biofuel blending by fuel producers was passed in 2005 and expanded in 2007. Even so, President Obama at least did nothing to get in the way of the rapid growth of the biofuel industry, which saw production rise by 62% between 2008 and 2015.

During the last year of the Bush Administration, wind and solar power respectively supplied 56 Terawatt-hours (TWh) and 1.6 TWh. By 2015 those consumption numbers had grown to 193 TWh and 39 TWh for wind and solar respectively. That amounts to a 245% gain for wind power and a whopping 2300% gain in solar power production over the first seven years of the Obama Administration. And, in contrast to oil and gas, renewables production is likely to grow again in 2016.

Certainly some of Obama's decisions have been viewed by the fossil fuel industry as hostile. And President-elect Trump will work hard to erase his predecessor's energy legacy. The shift in U.S. energy policy over the next four years is likely to be an ongoing focus of political debate and source of investment profits. To take advantage of the coming changes, consider joining us at The Energy Strategist and MLP Profits.